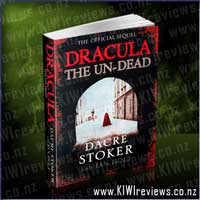 At last, the first Stoker family- supported sequel to one of the bestselling and most influential novels of all time

Bram Stoker's Dracula is the prototypical horror novel, inspiration for the world's seemingly limitless fascination with vampires. Though many have tried to replicate Stoker's horror classic - in books, television shows, and movies - only the 1931 Bela Lugosi film bore the Stoker family's support. Until now.

Written by a direct descendant of Bram Stoker and a well- known Dracula historian, Dracula: The Un-Dead is a bone- chilling sequel based on Bram Stoker's own handwritten notes for characters and plot threads excised from the original edition. Written with the blessing and cooperation of many members of the Stoker family, Dracula: The Un-Dead begins in 1912, twenty-five years after Dracula 'crumbled into dust.' Van Helsing's protege, Dr. Seward, is now a disgraced morphine addict obsessed with stamping out evil across Europe. Meanwhile, an unknowing Quincey Harker, son of Jonathon and Mina, leaves law school for the stage, only to stumble upon the troubled production of Dracula, directed and produced by Bram Stoker himself.

The play plunges Quincey into the world of his parents' terrible secrets, but before he can confront them he experiences evil in a way he had never imagined. One by one, the band of heroes that defeated Dracula a quarter-century ago is being hunted down. Could it be that Dracula somehow survived their attack and is seeking revenge? Or is there another, far more sinister force at work whose relentless purpose is to destroy anything and anyone associated with Dracula?

Fast-paced, full of suspense, and rich with historical detail, Dracula: The Un-Dead is the answer to every vampire fanatic's prayers.

Nee Naw and the Cowtastrophe
Rating: 9.9

This is the OFFICIAL sequel to the original 1897 original (Ahhhh was my original reaction).When I heard that a sequel had been written I was mortified that such a classic had been developed upon. I have always hated when people make sequels of much loved classics. You instantly think...Oh gawd, they are going to ruin the book aren't they?

Once the story of the original has finished I believe it is a better thrill for you to imagine for yourself what the characters in the story did for the rest of their life. After Dracula had been killed and everyone had settled down I thought that they would visit Transylvania, regularly meet up with each other and talk about the old times...but not in this interpretation.

I bought the book as I knew I would do and began turning the pages. It was written by two people, a direct descendant of Bram Stoker, Dacre Stoker and a writer called Ian Holt.

The story began with a hunt for Elisabeth Bathory, the Blood Countess of legend who is being hunted by Dr J Seward himself. They have depicted him as a broken man who feels he doesn't have much purpose any more. Bathory is a lesbian, they made this very obvious because there is a description about the first time she fell in love with a woman. I have no idea whether the real Bathory of history was of the persuasion but...ya know, she killed lots of servant girls in her time.

You slowly learn that a lot of the original characters have gone a bit downhill, all scarred in their own way by Dracula. Everyone is scarred apart from Quincey Harker that is, the son of Jonathan and Mina Harker (named after the original and was only mentioned briefly in the epilogue of the 'real' book.)

One thing that I disagreed with was the writing style. I thought that if you were going to write a sequel to a nineteenth century novel then you should adopt the literary style of both the style of the writer and the time. For example nothing is hidden in the writing. Everything was hinted at, not actually mentioned. An example is in the story 'Carmilla' by Sheridan Le Fanu, in which the vampire character was an obvious lesbian. It was the same in Dracula, everything is 'suggested' and I think that this way of doing things should have been carried on in the sequel...ah well, I can let them off that.

...but then the writers did something blasphemous... all of the original characters started to be killed off one by one. What were they thinking? Dr Seward was run over by a carriage, Jonathan Harker was impaled in the middle of London (why?) Oh yeah and Dracula was not dead but had become an actor and was acting himself in the Dracula play. Even Bram Stoker himself becomes a character in the story, looking over the play of his own book. Dracula is depicted as a sympathetic character as well who looks back at the old days when he was a prince fighting the Turks... oh yeah and Abraham Van Helsing turns out to be a right old nut job.

I won't spoil the ending in case you want to read it but although I was sceptical about it at the beginning I thought it was an enjoyable enough read it. I still held my own opinions about what happened to the characters after the original story so I treated this book as somebody's own interpretation. A good book for the bookshelf with those with an interest in this sort of thing.

A good read if you don't take it too seriously. Why are most female vampires depicted as lesbians?...in literally every single vamp book.

Dacre Stoker and Ian Holt would have had a hard job trying to resurrect the character of Dracula in the only authorised (by the Stoker family) book since the original book by the gothic master himself: Bram Stoker.

Fans of the original Dracula may find the re-setting of some of the dates to fit the new book a little unsettling, but this is done with good reason: to make history of the time fit a little better. The authors have thoroughly researched the plot, based, it is said, on the original sequal notes by Bram Stoker, but have added a twist by adding in many historical events and characters. Jack the Ripper and his murderous reign is brought in. So too, is Bram Stoker as himself. Also Henri Salmet (who became the first to fly to London from Paris) turns up; and the Titanic makes an appearance sailing off into history. Some of the original landmarks, such as Carfax Abby make a return and some much loved characters, though now quarter of a century older, are present too. Mina has not aged, Jonathon Harker is a bitter old man, Van Helsing is at the point of death, Lord Godalming avoids any contact with his previous friends.

A host of new characters in the form of Countess Bathory and Jonathon and Mina's son Quincy taking the title roles in a fast paced thriller.

Fans of the Original Dracula will remember the story written in journal form, something the modern writers have avoided, preferring to use the more contemporary novel format which makes for a faster and more compelling read. The language at times seems to try to hark back to the language of the day with word usage such as perambulator, incandescent light bulb and electric torch lying anachronistically with modern syntax and word use - one thing that bothered me was seeing such neologism as 'bloodred' rather than 'blood-red' and there were a few other examples present.
Something else present was the overt sexuality, and this is perhaps because the modern reader wants to read the sex scenes; this I felt could have been more true to the original in that sex scenes were implied but the sensibilities of the time prevented one from saying as much.

Dracula, far from being killed at the end of the last book, is suddenly very much alive but hunting a more fearsome opponent in the form of Countess Bathory (fans of horror may know she was the countess who bathed in the blood of virgins to keep herself looking young, and the descendents of Countess Bathory have only just apologised for her crimes against the villages). Dracula is cast not in the fiendish being of lore, but as more of a sensitive new age guy, and this didn't really sit well with me, despite the authors using a sub-plot of Bram Stoker hearing the story from someone else to explain the change in character. I'm not sure that the rehabilitation from horror personified to thoroughly nice caring chap works for me.

Bathory, has an excellent role in this book, and is a thoroughly believable creature of the night hunting her prey and toying with the people around her. And in many ways she outdoes many of the vampire genre today. I understand Hollywood is interested in doing the film version and this could be a fantastic part for someone.

All in all, this book has plenty to offer - a fast paced book that once you pick up you never want to put down and it did cause a few sleepless nights where I was sat up reading until the early hours-. There were a few laugh out loud moments (where perhaps the 'horror' was a little clichť) but on the whole it was a thoroughly enjoyable book and one to be recommended to all fans of the genre.

Please and Thank You are magic words!

This manners board book grows with your child:

Babies: Point to the images, touch the flaps.
1-2 Years: Look at the pictures and text. Listen and repeat the words.