« The Mirage Makers 3: Song of the Shiver Barrens review

ProdID: 2298 - The Mirage Makers 2: The Shadow of Tyr
Written by Glenda Larke 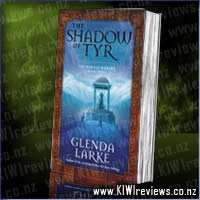 Disclosure StatementFULL DISCLOSURE: A number of units of this product have, at some time, been supplied to KIWIreviews by the company for the purposes of unbiased, independent reviews. No fee was accepted by KIWIreviews or the reviewers themselves - these are genuine, unpaid consumer reviews.
Available:
January 2007

The Mirage Makers 2: The Shadow of Tyr product reviews

While Demitra struggles to start a rebellion against the Exaltarch, her young son, Arrant, struggles with his own inadequacies. He believes himself rejected by his father, and is alienated from his mother because of her relationship with her one-time slave, Brand. At the same time, he is unable to control his own Magor powers predictably

Arrant′s only companion is his half-brother, Tarran, a member of the Mirage Makers, who has little idea of what it is like to be human. This unlikely pair do their best to grow up in a changing, hostile world, but when the Ravage once again threatens the Mirage Makers, Tarran disappears. Without his brother, Arrant is vulnerable to the plotting of the Brotherhood and Falmon. He is tricked into placing Brand and his mother in danger. While Demitra and her son have the power to save themselves - and each other - the price they will pay for their lives may be too high.

A Short History of Progress
Rating: 10.0

Demitra Ligea was stolen from her home as a child and then sent back, many years later, to destroy them. Unfortunately for her captors, things didn't exactly go according to plan and now, in book two, Ligea is looking for revenge - and her unborn baby is along for the ride.

The second instalment of the Mirage Makers trilogy focuses on Ligea's rise to power and the gathering of her army to mount a huge rebellion against the dictator of Tyr. It is a very personal journey, filled with self-doubt, determination and a good sprinkling of very cool magic.

After Arrant's birth, the narrative shifts to include the young boy and we begin to see a very different side of Ligea, through her sons eyes. His connection to his half brother is probably my favourite thing about this series. Tarran is joyful, innocent and also, somehow, very old and wise. As the reader, you completely understand what Arrant is going through, especially with his jealousy over his mother's 'new' lover and when his decisions lead to disaster, it is hard to blame him as much as he blames himself.

I was impressed by the scope and weight of this fantasy. Glenda Larke has built a solid world and populated it with real people I both believed in and cared about. The Shadow of Tyr is both an excellent second instalment and a thrilling prologue to what will, no doubt, be a rather dramatic conclusion in Book 3: Song of the Shiver Barrens.

May the Force be with all aspiring Jedi cooks as they use Yoda, Darth Vader and R2-D2 shaped cookie cutters to create 30 sweet and savory treats!

From Chocolate Chewies to Obi-Wan Tons, this galactic cookbook features easy-to-make recipes for Star Wars-themed treats that will delight any Jedi appetite.