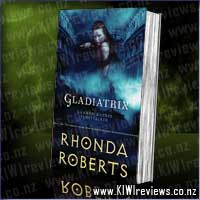 Left for dead when she was two' Kannon Jarratt has no idea of her real identity. Now' twenty years on' she discovers that her mother might be US Time Marshal' Victoria Dupree.

Kannon travels to ancient Rome where Victoria is investigating the Hierophant' mysterious leader of the Isis cult. To find her mother' Kannon becomes a gladiatrix in the service of Domitia Crassus' the only person who knows the Hierophant′s identity.

Unfortunately' all paths are leading her to an epic battle to the death in the arena ...

When I read the blurb for Gladiatrix, I thought it sounded a bit like the Ancient Future series by Traci Harding (another story about a 'black belt' girl who goes back in time). I was pleasantly surprised, when I finally read Gladiatrix, to find that is was entirely unique and rather enjoyable.

That Rhonda Roberts has a PhD (in the formation of knowledge systems in different cultures and historical periods), and has travelled extensively, shows in her writing style. Her prose is confident, clear and fast paced, dragging me through to the end without remorse or respite (it was about 2am when I finally finished and could go to bed).

I enjoy the effort Roberts has gone to in making this an interesting intellectual challenge, as well as a fun foray into ancient Rome. There are questions abound, from the standard 'Who is my mother?' made more complicated by the strange circumstances in which our heroine was found (tied up in a cave in Australia aged two), to the more interesting 'What do I have to do to save her?' involving ancient Roman intrigue, gladiatorial bouts, acting in plays and trying not to fall in love with the 'hired' help.

In Gladiatrix, Roberts successfully incorporates Time Travel into a world we almost recognize, an alternate earth where the only noticeable differences are the existence of the NTA (National Time Administration) alongside NASA, and the continued existence of Isis worship in America. I love the way that all of these factors flow through the story without hesitation, as though they have every right to be sitting prominently in the centre of what we thought we knew about Union Square, and time travel for that matter (Roberts bends a lot of the established 'rules' without apology).

I give this book top marks for telling me a story I wanted to read in a way I never could have expected reading it. My only criticism is that I want to read the next one! Seriously! It is unfair to end it like that.

Enter the enchanted world of Disney Princess Palace Pets. Meet Pumpkin, the glamorous puppy who loves dancing and going to balls - and learn how she won Cinderella's heart.