« How to Speak Dolphin review 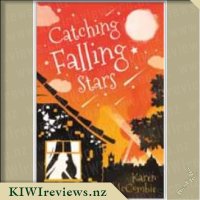 It's 1940. Gloria and her little brother have been evacuated to the countryside to get away from the dangers of the Blitz in London. But their new home is not as friendly as they had hoped.

The woman they are living with, Miss Saunders, is strict, severe and an outcast in the village. And the local children and other evacuees are equally unwelcoming and mocking. But Gloria quickly learns that nothing is ever as it seems in this strange new place.

Refugees have always been a fact of life - events such as wars and natural disasters frequently result in people having to relocate in another area and adjust to a new way of life. The "refugees" of "Catching Falling Stars" are two children, Rich and Glory, whose parents have sent them from the London of World War 2 to a relatively safe place in the country.

Resettlement is not as straightforward as the children had hoped. They are unwelcome intruders, and are very unhappy at being away from their family and friends. Their plight is described through Glory's eyes as she shares her concerns and fears with the reader. I felt it is appropriate that Glory is the narrator because she is able to explain in the words of a thirteen-year-old just how unpleasant the whole experience has been.

I have read other books about children being moved away from London, and they often present a more positive picture of what life is like for the evacuees and how much they enjoy the experience of living in the country. Some stories portray the children as ideal, well-behaved creatures who quickly settle in to their new lives and are constantly grateful for being rescued.

This book, however, appears to me to be more authentic as it describes the down side of living in someone else's house and community, and also presents the children themselves as being less than perfect, with normal human faults. There are dark references to other evacuees being lined up for the locals to select the ones they like the look of, and the humility of being one of the rejects because of some physical or perceived behavioural defect.

I did enjoy reading this book. Glory and Rich came across as very real people with an important story to tell; their imperfections (Glory's scar and Rich's extreme nervousness) actually reinforced them as characters for me. Their learning to overcome these handicaps serves as a great example to prove that anything can happen if you work for it and are sufficiently flexible to compromise.

This year I have really got into historical novels based on World War 2. I have found that the ones aimed at teens has been perfect for me as the reading isn't too heavy going. 'Catching Falling Stars' is yet another teen book that I have really enjoyed reading.

I love the combination of the orange, black and white on the cover. Initially it was simply eye catching and an attractive colour, however, after reading the book it had a lot of meaning. The same goes for the title. I didn't really know why a book based on the war had the title "Catching Falling Stars". It is a perfect title for the book as it captures an important moment near the end of the book.

The book begins with a family in London who have decided to keep their children with them rather than send them off to the country with the other evacuees. The reality of war is strong in that part of the book and sense of absolute fear. After this, the story moves out to the country and the feeling changes and deals with the children as they attempt to settle in with strangers.

It is hard to imagine what life in the war was really like. The thought of experiencing the bombings, being split from my parents as a child or being stuck with a stranger to look after me is beyond me. Now as a parent of two young children myself, it is even worse to consider what it would be like to have to dump my own children with someone I didn't know and return to work. 'Catching Falling Stars' encouraged a lot of reflection on how lucky I am in my own life and experiences.

The story is as much about people and relationships as it is about the war. It shows the reader that assumptions can be made from all sides about people they don't know. I remember back to my teenage years and I can think of many of the girls I thought of as snobs or others I thought of as strong, happy people. The book highlights the fact that these perceptions are just that and the reality of what a person is like is only found out when you truly get to know a person. A person who it tough and grumpy on the outside might be the person you want on your side when problems occur in your life. Glory and Rich come to love the lady who too them in, Miss Saunders, as well as some other kids in the neighbourhood, all of whom were initially strange and standoffish. While these relationships were developing, the war kept going on. I imagine that is how distant it felt for people who were away from the bombing sites during the war and then they would be caught by surprise when their village was hit.

I moved from Ireland at the age of 12 and I believe that I felt similar to Glory in many ways. Although my Mum and Dad were with me in the same country, city and house, I experienced the feeling of being different and people laughing at me etc. It would be interesting to be able to pop back as an adult and observe how these situations actually played out. Perhaps a case of misunderstanding from all sides? So easy to see these things as an adult. If only we could have been aware so much things as children. It could be useful to share 'Catching Falling Stars' with a child/young teen who found themselves in a similar situation. It might enable to see that they might not be the only ones who are a bit lost or feeling different.

The end of the book is quite powerful and brought me to tears. I feel like I really became invested in the characters and the events they lived through. Although this book deals with death and bombings, I think it is a relatively tame war story and could be enjoyed by children 8/9 and up.

I like reading historical accounts usually, though I have become a bit shy of gore and gruesome stuff. That is why the Young Adult books really appeal to me. The books still cover similar situations and historical detail, but with less of the graphic violence. I was a bit apprehensive reading this still, as it is set during the London Blitz. Whenever I think of the Blitz I can hear the sirens in my head, and think of all those bombing and try to imagine living through that.

When we first meet Glory and Rich, we are introduced to their world. Their London, includes the smell of sweets from a nearby factory. Their London seems empty of children, as they haven't evacuated with the rest of the kids. We see glimpses of their home, and neighbours. And we get to see that things aren't easy for Glory, or Rich having a war zone on their doorstep. It's hard to imagine having an enemy that close to home. Before we hit page 20, the air raid sirens are going off and they are moving to their bomb shelter.

Then we follow the kids into the country as evacuees. As I was reading, I could not help but juxtapose their experience with that of the events going on for the Syrian refugees as well. While, in many ways the experience Glory and Rich have is more welcoming, there is still a city/country culture shock to get through. They meet groups of people who seem very closed off and unwelcoming, but slowly hearts warm to the kids and secrets are revealed.

I found this book a really good and uplifting read. It's as much a story of friendship and embracing of differences, as it is a coming of age story. Emotions occasionally get very heated, but what is great is the way the characters work through it. There's more consideration for the possible left over trauma the kids might be experiencing. Though, there is also a sense of "stiff upper lip" going on, on the surface.

I found this book quite dangerous. I took it to work to read on breaks and I found myself sneaking the book open every now and then to read a further page. I really wanted to see what would happen and what the big secret was. I also really identified with Glory, and I wanted to make sure Rich was okay as well. I have a daughter who could be Rich in many ways, and so I felt quite motherly towards him. The ending held a few surprises and I wondered how typical of the evacuees experiences, it would have been.

I would absolutely recommend this to any kid who has an interest in that time period and how war affected London. It would also be a great book to start the conversations with kids about evacuees, refugees and why war can sometimes lead to displacement for civilians. I found this story uplifting, even with all the bad happening. The feeling of a wider community pulling together was magic.

In Percheron, Zar Boaz is preparing for the imminent arrival of the Galinsean war fleet. Despite the necessity for him to be part of the delicate negotiations, Spur Lazar determines to travel back to the desert to rescue the abducted Zaradine Ana.

Ana is a prisoner of the despotic Arafanz and his fanatical followers, and as it slowly becomes clear what they plan for Percheron, Ana does not know if she ... more...