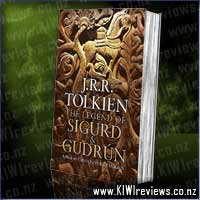 The Legend of Sigurd and Gudrn is a previously unpublished work by J.R.R. Tolkien, written while Tolkien was Professor of Anglo-Saxon at Oxford during the 1920s and '30s, before he wrote The Hobbit and The Lord of the Rings. It makes available for the first time Tolkien's extensive retelling in English narrative verse of the epic Norse tales of Sigurd the Vlsung and The Fall of the Niflungs. It includes an introduction by J.R.R. Tolkien, drawn from one of his own lectures on Norse literature, with commentary and notes on the poems by Christopher Tolkien.

You Are What You Eat - and Other Mealtime Hazards
Rating: 7.6

Alphasaurs and Other Prehistoric Types
Rating: 9.5

Defender of the Realm
Rating: 9.3

Reading the Legend of Sigurd and Gudrun, one starts to get a feel for where Tolkien was coming from when he wrote the Lord of the Rings. Told in the style of a very old English epic poem, Tolkien has rewritten the ancient Norse Classics from the Elder Edda into two distinct stories, the Lay of the Volsungs and the Lay of Gudrun.

Many of the characters are easily recognizable by those possessing some familiarity with general Norse mythology (or anyone why has played Age of Mythology recently) - Loki, Odin, Brynhild (the valkyries) and of course the shining hall of Valholl (better known as Valhalla). Yet while on the surface, both lays (the technical term for this style of poem) deal with epic battles and tragic, honourable ends to noble heroes, I came away with the distinct impression that it was the women (Gudrun and Brynhild especially) who really decide the course of fate - at least once they are jaded.

I was surprised to find the poetic storytelling much more readable than I had initially anticipated. There is a rhythm and flavour to the prose that carries you along, even when you don't fully understand all the references: you still keep reading just to know what happens. That is one thing consistent with Lord of the Rings, Tolkien is truly a master story-teller, bringing together many different threads of these original classics and weaving them into his own cohesive version.

The lays themselves would have been quite confusing without the context of the commentaries, both by Tolkien himself (in the form of preserved notes and lectures) and by his son Christopher. I occasionally found my attention drifting through these notes, which are written in a similar form to the average university text book, but they were ultimately invaluable in understanding the book as a whole.

In the end, I was pleasantly surprised by this book and would highly recommend it to anyone with an interest in Tolkien's work, or classical mythology in general. It certainly inspired me to give epic poetry a go (I found it really hard to get the metre right and find words that actually fit). This sort of poetry is a meticulous art form and I admire the skill that has gone into crafting such a masterpiece.

The author chronicles the lives of three generations of Chinese men in America.

Woven from memory, myth, and fact - a journey into the hearts and minds of Chinese men in America: the grandfather who slaved in the Sierra Nevadas on the transcontinental railroad; the father who danced down Fifth Avenue, like Fred Astaire, on days off from the laundry; and the son who returned to China to find release from his dead mother's angry spirit. Here is an accomplished storyteller's remarkably beautiful tale of what they endured in a strange new land.