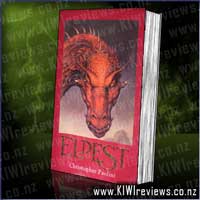 Eragon and his dragon, Saphira, have just saved the rebel state from destruction by the mighty forces of King Galbatorix, cruel ruler of the Empire. Now Eragon must travel to Ellemera, land of the elves, for further training in magic and swordsmanship, the vital skills of the Dragon Rider.

It is the journey of a lifetime, filled with awe-inspiring new places and people, each day a fresh adventure. But chaos and betrayal plague him at every turn, and Eragon isn't sure who he can trust.

Meanwhile, his cousin Roran must fight a new battle back home in Carvahall - one that puts Eragon in even graver danger.

Will the King's dark hand strangle all resistance? Eragon may not escape with even his life...

Boy vs Beast - Battle of the Borders
Rating: 9.5

The alien hydrogues have been defeated, driven back into the cores of their gas-giant planets by an alliance of the Earth Defence Forces, the ancient Ildiran Empire, the gypsy-like Roamer clans and fantasic water elemental beings as well as gigantic living 'treeships'. But as the various factions try to pick up the pieces and recover, the deep-seated wounds may be fatal. The Hansa's brutal Chairman Basil Wenceslas struggles to crush any ... more...