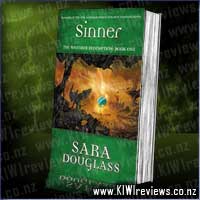 The land of Tencendor has been united for more than forty years, thanks to Axis, who is the legendary Starman. He defeated Gorgrael and brought peace to the three races--and upon fulfilling his destiny, Axis and his consort Azhure retired to the ethereal sphere in the heavens, and ceded his authority to their son Caelum. But the path of the son is not necessarily that of the father.

Caelum is untried and has known nothing but peace during his lifetime. And while the three races seem to be at peace, there are undercurrents of jealousy and bitter memories buried just beneath the surface. So when strange powers begin to manifest in their world, and threaten the destruction of all he holds dear, Caelum will have to find the strength to fight this threat--and to fight his mortal brother Drago, who is not as powerless as he appears to be. Something killed their sister, and Caelum knows Drago is the culprit--but the Supreme Ruler of the land must have proof, and Caelum has none. Caelum desperately tries to juggle saving the world with proving his brother killed their sister, but time grows short and the demons are drawing near...

Having read the first two books of the Darkglass Mountain Trilogy by Sara Douglass (a subsequent series), it was a fascinating leap to jump back into a time when Tencendor had not yet vanished beneath the sea and many of the characters who had been only legends were suddenly alive and 'breathing'.

'Sinner' is a book that can stand alone, but I suspect appeals far more to an audience that has already read Douglass' first 'Battle Axe' series because this set deals with the children and aftermath of that saga. I particularly enjoyed the characters of Zenith, Axis SunSoar's youngest girl, and Faraday, his ex-lover, for their tenacity and compassion. It was only a pity that Faraday turned up so late in the book, because she was by far my favourite character.

In a world where everyone is making bad choices and destroying themselves through misunderstanding and terrible communication skills, Faraday stood out as a calm, confident presence. Her experiences in her previous life left her without fear of dying and with a power that was beyond any magic weilded by the winged Icarii race.

Douglass is an excellent writer who delevops her worlds and her stories so dynamically that you really need to read them in order to get the full impact. She skillfully manages transitions between different character points of view such that you are not tempted to 'skip ahead' and find out what happened next to the person you were reading about. I hope that the trials of the next book will draw out the strengths of the characters to the point where they are as admirable as Faraday; she made reading this book worthwhile.

What do Terry Pratchett, Jackson Pollock, Star Trek, and Velcro have in common?

They are all invoked by science writer Jennifer Ouellette to shed vibrant new light upon some of the most revolutionary scientific developments in the history of mankind. The Addams Family Values illustrate Newton's laws, Back to the Future demonstrates the ... more...