Home > Categories > Books > Non-Fiction > The Writing On The Wall review

« Fall; or, Dodge in Hell review

ProdID: 8438 - The Writing On The Wall
Written by Juliet Rieden 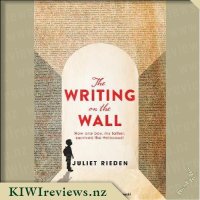 The Writing On The Wall product reviews

In 1939, as Hitler's troops marched on Prague, a Jewish couple made a heartbreaking decision that would save their eight-year-old son's life but change their family forever. Australian journalist Juliet Rieden grew up in England in the 1960s and 70s, always sensing that her family was different in some way. She longed to have relatives and knew precious little about her Czech father's childhood as a refugee.

Juliet traces the grim fate of her father's cousins, aunts and uncles on visits to Auschwitz and Theresienstadt concentration camps, and learns about the extremes of cruelty, courage and kindness. Then, in a locked box in Britain's National Archives, she discovers a stash of documents which include letters from her father revealing intimate details of his struggle.

Meticulously researched and beautifully told, this is the moving story of a woman's quest to piece together the hidden parts of her father's life and the unimaginable losses he was determined to protect his children from.

Keeper of the Crystals 2: Eve and the Fiery Phoenix
Rating: 8.3

I approached The Writing On The Wall with a strong sense of anticipation, excitement even, because my own family has a very similar background and we too have researched our origins and discovered the most amazing, unforgettable facts about ourselves. Whilst acknowledging and mourning the dead, it is nevertheless a privilege to be able to trace the stories of relatives long gone, while learning of the journeys of those still living; it offers insight into one's own skills and passions, inherited no doubt from those who went before. Families were decimated by the Holocaust, but their spirit lives on in the family members who survived and their children. I started at the first page of this book and did not put it down until I reached the acknowledgements!

Apart from my personal interest in the subject matter, I was impressed by the way Juliet Riedel presents her research. Despite the work that has gone into tracing her father's story, this is no dry textbook. The story is offered as a personal memoir; the writing style, almost conversational at times, reflects this desire to connect with the reader. The historical references are sufficient to support the story, but are added incidentally so that they do not impose - they are necessary of course to highlight the implications of shifting attitudes, border changes, and various restrictions on travel, etc so that the events described are clear to follow.

It came as no surprise to me to read of the attitudes of many of Hanus (John) Rieden's countrymen towards Jews - this is a common side-effect of divide-and-rule strategies by a government that is out of control and manipulates the majority so that they inadvertently join in the action against the minority. This was happening in every country that was under the thumb of the Third Reich, fanning prejudice and encouraging racist attacks. In England, too, Chamberlain's push for "peace in our time" sealed the fate of many when he signed the Munich Agreement. What was more insidious was the reaction of the entitled inhabitants of Lubbock Road in Chislehurst, who arrogantly demanded that they wanted no "invasion of foreigners" in their select residential neighbourhood.

There is a very strong message in the book about tolerance and justice, and a plea that a tragedy such as the Shoah should never happen again. It is timely that this message should appear, given the political and social attitudes of many countries even now, 80 years on. Juliet's father is portrayed as a pacifist and a fundamentally good person despite his life of unending struggles, first to adjust to life without his parents, then to survive in a new and sometimes hostile environment where the language and customs were all foreign to him and money was always scarce. That he finally achieved his aim - his family around him and a situation of financial security - is due completely to his tenacity and ability to be flexible amidst change.

I liked having the family trees to refer to; it made sense of the relationships, some convoluted as happens in any family history. It was also helpful to have the photographs included as they enabled the reader to put faces to many of the names in the book. Together they enhanced my reading as I was continually stopping to check them, mainly to see where a particular name slotted in. And although any family tree is always in a state of change as deaths and births are added (as well as second and subsequent marriages), the printed versions included here have records for all those mentioned in the book.

If I were adding something, I would like to see an index included. There were so many names (people and places) that it would have been helpful to be able to refer back. When I am reading a memoir or a history I often go back and re-read a section to clarify a point, and indices are most helpful in this respect. Other than that, I found the book fascinating and a wonderful account of a very special man (and his family). Apart from some of the details (my family was Polish rather than Czech, and the cousins we lost were in Majdanek), this could have been my own family's story!

Like all weka, Aroha is curious and smart. When her tastebuds lead her into trouble, she finds herself snatched from her peaceful home in Grey and carried across the countryside. Alone in this strange new place, what is one young weka to do?

Follow her instincts and find her way home, of course. Her journey takes her through farmland and swamp, across rivers and over mountains. Many dangers and other challenges face her but with ... more...