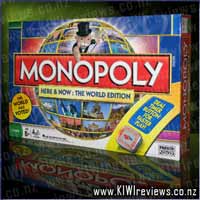 The world's #1 game has gone global!

Millions of people from all over the world voted for their greatest cities, so now everyone, no matter where they live, can play Monopoly on a global scale.

Travel around the world's greatest cities, wheeling and dealing in millions of Monopoly dollars. As you travel, build houses and hotels inspired by buildings from across the globe - from mud huts to skyscrapers.

Discover which cities were voted the greatest by the world. As you play, discover interesting facts about the world on the Chance and Community Chest cards. Check out the international inspiration behind the player pieces, houses and hotels.

Also includes a "Deal Button" timer device, to add an extra element of excitement to the game.

My 13 year old son won this game in another competition a couple of years ago and he loves it. He spends hours playing it with his friends and even brings it with him when he goes on sleepovers.

It is bright, colourful and exciting, it is a game that is challenging while being fun and complex while being easy to play. It has various cities from around the world which is good for his geography knowledge and has various styles of play so he can play the short version or the long version,

He has spent many hours on the floor of our lounge wheeling and dealing, buying up houses and hotels to beat his mates and laughing when someone lands on the most lucrative space. Whoever is the banker learns a great deal about finances as they give change, work out how many houses for a hotel or help someone who is trying to pay off their rent. They challenge each other which assist their negotiating skills and there is a considerable amount of conversation, sometimes even raised voices.

It is one of the many games that has stood the test of time and will never go out of fashion. I have no hesitation recommending it to other people, especially those who like a challenge , Family time is very important, playing a board game like Monopoly is a positive way to get that time together while learning and having fun.

I have loved Monpoly since, well, as far back as I care to remember. I can still close my eyes and see the old style: small slips of coloured paper with black print for money, basic artwork and just 6 old metal tokens, property cards that looked more like oversized tram tickets, and a board that just had the basics and no more. Gosh, that brings back some good memories.
But now we have a new, more modern age, and a whole new generation (or three) who are keen to see what all the fuss is about. To satisify them that it is still a viable game in this modern era, the folks at Hasbro have boosted the old $200 to $2 million for passing Go, used more contemporary properties, and thrown in an electronic timer to keen the players on track, so that there is a chance the game will be over before someone is ready for the retirement home.
Personally, I loved this new edition just as much as I loved the old version back in my youth. This version includes properties from all over the world, and it was great to see the bonus add-on pack that allowed us to slap New Zealand into the game, since we missed out by the narrowest of margins on the global vote.
The buildings are great, with 'houses' and 'hotels' from all over the world to choose from. A fun way to get the kids into geogrpahy I guess. The money still retains the old style on coloured paper with black print, but the artwork is much nicer and less faded than my old set in the attic!
All in all, this is a great upgrade. It gives an edgier, modern feel to the game, while still retaining it's original flavour. Well done Hasbro! An excellent compromise, and lead-in to newer versions of the game that expand the play maybe?

Gaming's notorious naughty squirrel is ready to stir up trouble on the Xbox and Xbox Live with all-new team-based multiplayer modes in Conker: Live and Reloaded.

Enjoy new Death Match and Campaign modes on Xbox Live or via System Link. Compete as one of six combat specialists across multi-mission campaigns. The warfare explodes with all ... more...