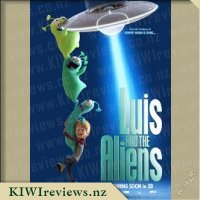 Disclosure StatementFULL DISCLOSURE: A number of units of this product have, at some time, been supplied to KIWIreviews by the company for the purposes of unbiased, independent reviews. No fee was accepted by KIWIreviews or the reviewers themselves - these are genuine, unpaid consumer reviews.
Available:
in cinemas 30 August 2018

Luis and the Aliens product reviews

An 11-year-old boy makes friends with three lovable aliens who crash their ship into his house in this animated adventure comedy. In return for Louis's help using the home-shopping network, they save him from boarding school and head off on an adventure together.

Luis and the Aliens is an unfortunate film that fails in many aspects. There is the bare minimum required, which has enough fast-moving colourful objects to entertain very young children but offers nothing that would make anyone over the age of 10 want to watch it. It has been 23 years since Pixar released Toy Story, and from that point onwards, there has been a steady increase in the quality of children's animated movies, that engages both child and adult alike.

I'm not too sure who came up with the storyline, or how many people the story had to go past before it was greenlit, but it seems peculiar to have a story about a child whose principal is trying to get him taken away from his father. There is nothing of substance to the plot, and there is minimal character development from the characters.

The animation is bright and colourful and largely well done. The opening sequence almost comes across as realistic until you come across the characters, so there is definitely a certain quality to it. However, movements don't always come across so well done; some movements glide as if they weren't animated properly, and other movements feel laggy. The character designs were fine and had enough variation that you could easily distinguish between human and alien, but it does feel a bit derivate to base the Ufologist father figure on the Ancient Aliens Guy Giorgio A. Tsoukalos (potentially the only "joke" that would be catered towards adults in the audience).

With a run time of under 90 minutes, the film feels long, as there is no emotional investment in any of the characters. The story consistently moves forward thanks to convenient plot devices, such as the aliens' ability to do anything that the story requires to get out of a sticky situation, which removes any sense of tension or suspense. There is a "twist" that is telegraphed early in the film and is so in-your-face that there is no enjoyment at figuring it out, and while it all connects together, it is ultimately convoluted and needlessly complicated.

There is an interesting theme that looks at the neglect that some children go through, and the consequences of such behaviour on the children, but the film goes about it in a strange way, with none of the human adults actually having Luis best interests at heart, and it paints a very poor picture of those who believe in aliens, single parents, homeowners associations, child protective services, and school principals.

The film is rather light-hearted and fun (minus some forced emotional plot points later in the film) but would have been much better served as a "G" rating than a "PG" as no parent would want to sit through it, unfortunately there are some "scarier" scenes that may frighten the younger children, so who this movie is targeted at is really a very small age bracket (ages 5-8 maybe?). When it comes out on DVD, this may be more popular as you can put it on and walk away, but as an adult, having to be present and sit through the film, it offers nothing engaging.

The cast has no really big names. Will Forte is probably the most well-known name in the cast list, but despite his career in animated and comedy films, no characters throughout the film have any emotion or authenticity. It all sounds stale, empty and emotionless. As if all lines were recorded over the phone with no context provided to the voice actors. Potentially, this could be due to the fact that is a German film that has been dubbed over with English dialogue, so things just don't quite match up.

Luis and the Aliens really fell short of expectations. The animation is good (though the fight sequences could definitely be improved), but the story and dialogue were very poorly written. With scenes too scary for the really young children, but not enough substance to keep the interest of older children, there really is a limited market for the film.

Score: 8.8
Product reviews for listing 7624: A Cure For Wellness
Directed by Gore Verbinski