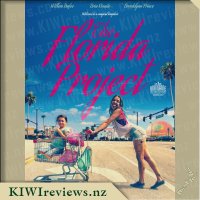 Set on a stretch of highway just outside the imagined utopia of Disney World, The Florida Project follows six-year-old Moonee (Brooklynn Prince) and her rebellious mother Halley (Bria Vinai) over the course of a single summer.

The two live week to week at "The Magic Castle," a budget hotel managed by Bobby (Willem Dafoe), whose stern exterior hides a deep reservoir of kindness and compassion. Despite her harsh surroundings, the precocious and ebullient Moonee has no trouble making each day a celebration of life, her endless afternoons overflowing with mischief and grand adventure as she and her ragtag playmates - including Jancey, a new arrival to the area who quickly becomes Moon's best friend - fearlessly explore the utterly unique world into which they've been thrown.

Unbeknownst to Moonee, however, her delicate fantasy is supported by the toil and sacrifice of Halley, who is forced to explore increasingly dangerous possibilities in order to provide for her daughter.

The Florida Project is a film for critics and film students. It exists to bring to light the lives of those of lower socioeconomic status and provides a litany of scenes to critique and discuss. For the regular movie crowd that has become accustomed to Hollywood "beautiful people and fast-paced action" films, this will fall short due to the lack of progress and direction of the film. Wikipedia is able to describe the plot in only one sentence; "Set during the summer, Moonee, a precocious 6-year-old girl, lives with her mother Halley in a community of extended-stay motel guests in Kissimmee, Florida." If that doesn't intrigue you, then this isn't the film for you, and you need not read any further.

The film provides a look at the disparity between the image that Disneyland portrays within its boundaries compared to the surrounding areas. Areas once full of potential accommodation lots to cater to incoming tourists, that have since fallen into disrepair, been abandoned, and reduced to low-income housing for those that struggle are one missed payment away from being homeless. Areas where arson, vandalism, drug use, alcoholism, and assault, are par for the course. But this is the area where the leading lady (our six-year-old Brooklyn Kimberly Prince, aka Moonee) thrives. She holds the innocence of a child, with the wisdom of a teenager. While she may not be able to comprehend the full context of every little play, she is a girl that has lived around a revolving door of people, and in turn has learned to recognise their quirks, and how to manipulate people to get her way. Whether it's trying to get free meals from a family friend, free ice cream by begging from strangers, or using peoples kindness to help her reach her own goals.

These are skills that she has picked up from Halley, her young, single mother, who embodies the respectfulness of a cream pie to the face. Disenfranchised about the world, she has long ago given up, in every manner but one (providing for her daughter), and we watch as doors close around her one by one and she spirals into a nosedive that she cannot escape. Portrayed by Bria Vinaite, Halley is a character that creates conflicting opinions.' she is both an absent mother, and a loving mother. We watch as she steals and scams tourists, undercuts larger companies, lies and manipulates people, and if she doesn't get her way we watch as she explodes in anger, with violence, coarse words, and spiteful actions. But we also watch her take every step that she can to keep a roof over her child's head, provides a level of habit and routine, and when she gets a windfall, all the spoils go to her daughter.

The film almost comes across as a documentary, as we watch Moonee corral her friends towards any adventures at any cost. They make do with the bare minimum of provisions and still enjoy every single day, whether it be spitting on a car from a balcony, or going on a rural safari to see some cows. Even if a friend gets grounded, Moonee fills that gap with another child from the neighbouring motel that she only just met. She's a child of opportunity and she takes every available one, no matter the consequence.

Willen Dafoe is the anchor in this movie, affording the positive male influence that is missing from many of these children's lives. Portraying Bobby, the owner of the Magic Castle Motel that Halley and Moonee live in, Dafoe has a role that is sparse and injected into little bits throughout the film. But he is still connected to every piece and takes personal responsibility for many things that are above the call of duty because he has that spark of humanity in him. He is definitely the most endearing adult character in the film, and you can see the struggle that he goes through every day ensuring his tenants pay up, but being as accommodating as possible because he knows they have no alternatives.

The film is shot beautifully, with the colours giving a youthful nostalgic feel, while the use of shadows brings back the reality and drudgery. The film feels real; there is no real resolution, people don't talk about their problems, everything is a form of conflict, people act irrationally out of spite and anger, instead of a journey with a direction it's repeating habits day in day out, and it's all there on the screen. It serves as a great reminder that the world is not always what you see. There is darkness amongst the light, and light amongst the darkness. The Florida Project attempts to bring this to the forefront. What am I meant to do with this information?

Baby is becoming a young woman in the summer where she meets Johnny Castle who teaches dance at a family Summer Camp, and in his off hours Dirty Dances with the other dancers. She learns a routine so that one of the women can recover from an abortion and becomes Johnny's lover. As the summer winds down, each must come to grips with responsibility and love and others' expectations.