New York, I Love You review 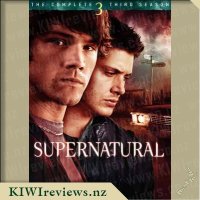 The yellow-eyed demon is vanquished, but at a terrible price. The battle that brought him down released hundreds of demons from Hell into an unsuspecting world. And it cost Sam his life. But a grief-stricken Dean made a deal with the Crossroad Demon: his soul for Sam's resurrection. Now Dean has just one year to live. One year to fight the unholy, the twisted, the ghoulish. One year to say farewell to Sam. And one year for Sam to search desperately for some way to save his brother.

Mind-bending adventure awaits as the Winchester brothers continue their astonishing odyssey into the supernatural... and their personal odyssey into destiny... in the suspenseful third season of Supernatural!

Season three sets off rather quickly from season two, all the deamons have escaped and now the brothers need to hunt them down, but this is further stressed by Sam trying to find a way to free Dean from his deal and Dean not really giving a damn about life at the moment. We have a few more little tidbits into the brothers life, including during a not so jolly Christmas episode and we get a few new characters, especially the particularly nasty Lillith (evil dressed up as something innocent is always particularly scary).

I really enjoyed some of the episodes, there is a very Groundhog Day like episode where Dean keeps dying and Sam has to figure out how to save his brother each day and get out of the loop. Ghostfacers is rather fun and we'll get to see more of them later on as well. This season felt a bit heavier than the last, though I would put that down to Dean and Sam fighting to find a way to free Dean from his one year deal, but they still managed to inject a few good moments throughout the season.

I'm really starting to enjoy Supernatural and I'm glad to be slowly plodding my way through the show. Bring on season four.

Score: 9.8
Product reviews for listing 3151: The Revelation of the Pyramids -  Type of Show: Documentary

The Revelation Of The Pyramids takes an in depth look into one of the seven wonders of the world, the Great Pyramids of Egypt. Mystery has surrounded these epic structures for centuries with theories varying from the scientific to the bizarre.

However with over thirty-seven years of in depth research taking in sites from China, Peru, Mexico and Egypt, one scientist has as at last managed first to understand and then to reveal what lies behind this greatest of archaeological mysteries: a message of paramount importance for all mankind, through time and space.