How to Train Your Dragon 2 review 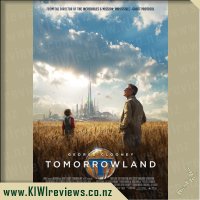 Disclosure StatementFULL DISCLOSURE: A number of units of this product have, at some time, been supplied to KIWIreviews by the company for the purposes of unbiased, independent reviews. No fee was accepted by KIWIreviews or the reviewers themselves - these are genuine, unpaid consumer reviews.
Available:
in Cinemas from 28th May 2015

A former boy genius (George Clooney) and a gifted teenager (Britt Robertson) set out on a dangerous mission to unearth the secrets of "Tomorrowland," an enigmatic location caught between time and space. I was quite surprised to find that when I received my tickets to the advanced screening of this film, that I received it in the form of a pin. A novel approach, that saves me having to carry around a rather obsolete cardboard movie ticket, and is actually an integral plot device within the film. I am unsure whether other movie goers will be provided with a pin to commemorate their purchase of a ticket, but it would certainly be a nice touch.

As for the film, I will be honest and say that the trailer provided me with a slight misconception towards the events of the film. I was under the impression that the film would largely be located in "Tomorrowland", but I found that it occurred much much later in the film. It is safe to say that the title of the film "Tomorrowland" is more of a red herring, as the film uses the location to focus on another, more immediate, environment.

In fact the entire personality of the character that George Clooney portrays was highly unexpected. The negative vibes that his character gave off were surprisingly convincing, and made me question his role in the film. Nearly every expectation that I had for this film was incorrect. And that is one of the reasons why I enjoyed the film. Every time it goes against what you expect, it grabs your attention. You are suddenly hit with the need to re-evaluate what you have watched and try to comprehend a reason for the event to unfold the way that it did. Athena, however, was a delightful character, full of surprises, although she very much appears to be pulled from another franchise.

Visually, the film was stunning, and the imagination and depth to "Tomorrowland" was exceptional. Although the differences in the reality and perception did raise a few questions in my mind. It did remind me a lot of the Batman "Dark Knight" movie in the way that, the number of people were sparse in places; certain areas that I expected to be full of people, were empty.

The main question of the film considers what are the consequences of knowing the exact moment of your own demise, and puts it into a context that almost moves the film out of science fiction, and into reality. It brings up the major problem in our educational, political, and economical systems, and reminds the viewer of the real options, and the effects of those options; the conflict between the two views of an impending doom, and limitless possibilities.

This film raised issues that I personally feel a connection with, but I don't think it was used in the most efficient way to portray it, purely as I had too many unanswered questions at the end. It did however make me think about the effect of negativity as a potential barrier to progress, and that is rather a mature theme for a film targeted at the general audiences. So good job.

Fired for their previous shenanigans, former Vermont Highway Patrol officers Thorny, Farva, Rabbit, Foster, and Mac get a shot at redemption from Capt. O'Hagan and Gov. Jessan. The wacky quintet must provide law enforcement for a French Canadian town that's transitioning to U.S. sovereignty. Their unconventional methods soon get put to the test when they encounter a smarmy mayor, mischievous Mounties, a smuggling ring and a 1,300-pound bear.