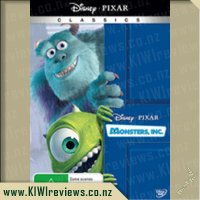 From the Academy Award?-winning creators of Toy Story, comes the hilarious, monster-sized hit that has captured the hearts of critics and fans around the world. MONSTERS, INC. opens the door to a world of mischief and mayhem and scares up monster-sized laughs along the way.

Top Scarer Sulley and his enthusiastic Scare Assistant Mike work at Monsters, Inc., the biggest scream processing plant in Monstropolis, but when one little girl named Boo wanders into their world, it's the monsters who are scared silly. Thinking the child is dangerous and toxic, Sulley and Mike do their best to return Boo to her bedroom, but there are some monstrous hurdles in their way.

With an eclectic cast of characters and a fantastic array of voice talent, MONSTERS, INC. is a heartwarming and irresistible film. Treat yourself to the most entertaining movie of the year, and you'll find that laughter is truly the most powerful force on earth.

The animation is great, the monsters look so real and I love how they have stinky deodorant and how they have normal lives just like us. One of my favourite scenes is when Sully thinks that Boo has been squashed into a rubbish cube. I think the voices were spot on and incredibly well done.

This movie has given my kids hours of laughs and they have asked for Sully toys in the past which has encouraged imaginative play so that is all good. I enjoy that fact that this is a family movie and there is nothing that would scare the kids, I have made a point of reminding my kids that movies are not real and that fact that they are pictures helps them to realise that it is not real and just someone using their incredible imaginations.

We have since watched Monster University which the kids asked to watch due to how much they enjoyed this movie and I will be buying both on DVD for future family movie nights.

My first memory of seeing this movie was with my mum, then followed not too long after by seeing it who knows how many times, at my uncles house, as my young cousin put it on repeat, and whew, did I see it on repeat. I did enjoy it enough though, to nab it when I saw it on special.

This takes place Monstropolis, where they get power by professional scares going through doors and terrifying kids and capturing the screams. Things get tough though when not only is it discovered that children aren't as scared as they used to be, so they're not collecting as many scares, but that a human child enters their world (and uhoh, kids are toxic!). Of course, truths are uncovered and things are set in motion to change the lives of everyone involved.

The animation is great, and the voice acting is superb. If you hang around for the end credits, you not only get treated to some of the play and Mike uses as an excuse during the movie, but you also get a whole bunch of outtakes from the characters, which is a lot of fun and adds more laughs to the film. This has stayed a firm favorite since I first saw it and the kids enjoy it as much as I still do, laughing every time they see it.

Every year in the ruins of what was once North America, the evil Capitol of the nation of Panem forces each of its twelve districts to send a teenage boy and girl to compete in the Hunger Games. A twisted punishment for a past uprising and an ongoing government intimidation tactic, The Hunger Games are a nationally televised event in which "Tributes" must fight with one another until one survivor remains.