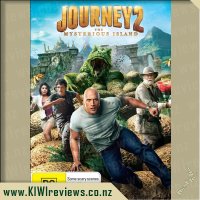 Having seen the first "Journey" movie, "Journey to the Center of the Earth" I knew I wanted to see this, especially given the trailer showing a part with Dwane Johnson and bouncing berries off his chest, I thought that looked hilarious.

Sean is fixated on all of Jules Vernes novels, especially after his adventures in the first movie, and when he receives a message from his grandfather he wants to set off in search of the mysterious island, the only cog in the works being his new stepfather, but after a bit of goading and nudging, he joins him on his trip. This leads them to catching a helicopter with a pilot and his daughter, crashing on the island and finding his grandfather. But of course, the island is on a timetable and they need to run.

The special effects on this are even better than the previous movie, there are some great scenes that really catch the eye and I'd love to see an island like that. The plot isn't anything amazing but it is a great deal of fun and is a good follow up to the first, in some ways I actually enjoyed this movie more than the first one, so will be watching this again for sure.