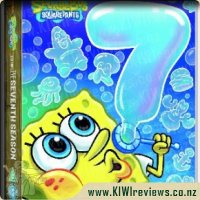 The character-driven toon chronicles the nautical and sometimes nonsensical adventures of SpongeBob, an incurably optimistic and earnest sea sponge, and his undersea friends.

Dwelling a few fathoms beneath the tropical isle of Bikini Atoll in the sub-surface city of Bikini Bottom, SpongeBob lives in a two-story pineapple. Instead of taking the logical approach to everyday challenges, SpongeBob approaches life in a wayward and unconventional way.

Whether searching for the ultimate spatula to perfect his burger flipping technique at the Krusty Krab, or just hanging out with his best friend Patrick (an amiable starfish), SpongeBob's good intentions and overzealous approach to life usually create chaos in his underwater world.

Game of Thrones: Season One
Rating: 9.5

Recently we found the Spongebob series on offer at The Warehouse for just $10.00, and when reading the back, it says the following; Get ready to squeeze out more than 9 hours of hilarity in season 7 of Spongebob Squarepants! This 4-disc set features Spongebob's entire modeling career, Squidward's whole public television career, and Mrs. Puff's complete Krusty Krab career. Plus, you get a hilarious whodunit, a song you won't easily forget, a slimy love story, the entire multi-chapter special "Legends of Bikini Bottom," and oceans more!

Spongebob and his friends in Bikini Bottom are a firm favourite for children and adults anywhere. This little yellow sponge is so adorable, and innocently cute you can not help but love him. Some of the episodes are not as good as the earlier original episodes but there are still many laugh out loud moments, that make it worth while! As the seasons go on the series does seem to be aimed a little more at the grown ups than at the kids.

The colours are bright, animations are much the same as always. Some of the storys are pretty lame but others are really very good, and your almost always guaranteed to feel sorry for the little sponge. But that does not stop you from watching though lol

Opened to mark Queen Victoria's 60th Jubilee, The Esplanade includes a Children's Play Area, A large Duck Pond, A Cherry Drive and an Avenue of Phoenix Plants. There are walk ways and a miniature railway through the native bush. The Esplanade also features Paddling Pools, Croquet Lawns, an Education Centre, Conservatory, Arboretum and a Bird Aviary.

The Esplanade is treasured by Young and Old alike.

There is no entrance fee, a small charge for train rides and a Cafe within the grounds.