ProdID: 3986 - Richard Hammond's Journey to the Centre of the Planet -  Type of Show: Educational Nature and Science 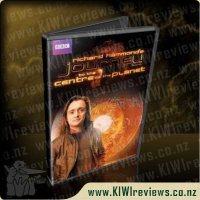 Richard Hammond's Journey to the Centre of the Planet product reviews

Using state of the art technology, Richard Hammond's Journey to the Centre of the Planet lifts the lid on planet Earth, peeling back its layers to reveal a hugely complex machine unique in our solar system.

At first glance, the surface of our planet appears solid and unchanging - but every day there are at least fifty big earthquakes and twelve powerful volcanic eruptions. Using the latest scientific information, we see what's happening beneath our feet and beneath the oceans in a way never seen before.

Along his journey, Richard takes the plunge in Iceland, travels into the abyss off the coast of California and sets eyes on bioluminescent deep sea creatures in the depths of Monterey Bay.

Game of Thrones: Season One
Rating: 9.5

I really enjoyed this DVD. It is a good educational one for the whole family. Miss Six has been asking lately how the world is made and the story of God's creation wasn't really cutting it so this DVD came at the perfect time. Aside from having Richard Hammond in it, who was a humorous presenter, the documentary uses good visualisations of the earth to give an overall picture of what it is underneath us that causes earthquakes, volcanoes, diamonds and mountains.

I have seen cross sections of the earth before, but never alive and moving as in this documentary so you can really understand how it all works.

Richard Hammond visits a good variety of natural phenomena on the earth's crust, sea shells on the top of mountains, space-suit clad scientists collecting volcanic lava, turtles using the earth's magnetic fields and scientists diving the Florida aquifers, to keep the geography lesson enthralling for all the family.

The bonus DVD Journey to the Bottom of the Ocean follows the theme of the first episode and explores the seas relationship with the inner earth. Richard Hammond drains the oceans, takes deep sea subs to see amazing jellyfish and follows an internet cable fixing ship. This perhaps isn't quite as family friendly featuring some tsunami footage though the footage is amazing. However older children and adults will certainly learn about the ocean floor in an entertaining way.

Overall this is a great series and I have really enjoyed watching both the DVD's. I imagine this is a set that we will be re-watching over time as my girls have more questions about our fascinating Earth.

Matt Smith returns as the Eleventh Doctor in Series 6 of Doctor Who in 13 thrilling, brand new episodes. The Doctor together with newlyweds Amy and Rory face monsters, mysteries and adventures across time and space. They find themselves in Sixties America, battling the invasion the world forgot, then journey on the high seas of 1696 aboard a pirate ship, to solve the mystery of the Siren.

They encounter the greatest war criminal in ... more...