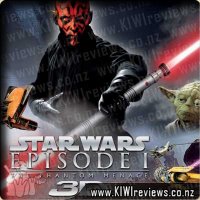 Disclosure StatementFULL DISCLOSURE: A number of units of this product have, at some time, been supplied to KIWIreviews by the company for the purposes of unbiased, independent reviews. No fee was accepted by KIWIreviews or the reviewers themselves - these are genuine, unpaid consumer reviews.
Available:
Check your local cinema for times.

The Trade Federation has blockaded the small world of Naboo, and two Jedi - Master Qui-Gon Jinn and Padawan Obi-Wan Kenobi - have been sent in to investigate and negotiate a settlement.

But there is far more afoot than anyone expected. A sinister plot is beginning to unfold, masterminded by a Sith Lord, hidden and trained in secret. During this, they discover a young boy with a mysterious past and an uncertain future, who none the less has an amazingly strong connection to the Force.

Can you believe it... 13 years after the original hit the big screens, it's back again, and this time in 3d.

One of the hardest things for a studio to do, if they want to jump on the 3d bandwagon, is take footage filmed in 2d and convert it. There just isn't the depth in the footage - what is behind the actors is lost and unless you want to reshoot, or lift the characters out of the background and re-render it all over again... well, that's some seriously HUGE budget right there. Thankfully for Lucas, since very little of the movie was actually shot in the real world - most of it being either green-screened of virtually built anyway - many of the conversion issues weren't insurmountable.

In fact, I was seriously impressed at how well it worked! Did it feel more 3d - heck yeah! Did it give anything extra to the movie? Alas, not a jot. There was no new footage, no amazing new perspectives, nothing new or extra at all, except for the stunning 3d conversion. Does this warrant paying out some big coin? I'm not entirely sure actually... For me, the 3d brought stronger life to the key scenes: The pod race - BRILLIANT in 3d, even if I did nod off for a bit part way through from sheer exhaustion after getting less than 2 hours sleep the night before, the undersea journey through the Naboo planetary core - moody, and full of big, big teeth, and the final battle with Darth Maul - wherein Qui-Gon passes into the Force and Darth Maul falls head over heels for a sloppy killing stroke from a young "Old Ben Kenobi".

My 11yr old son joined me on this outing, and he loved it! Mind you, he's seen the original 2d version a few times and loved that just as much. Will I invest in a fancy blu-ray player so I can buy this - and the other 5 movies sure to come - and watch them in eye-popping 3d. Doubt it. I might get episodes 4, 5 & 6 if they do a half-decent conversion. I liked what they did to 'modernise' those three in the first place and I can even forgive them for the retroactive species-transplant for Jabba the Hutt... so they might join the DVD shelf, we'll have to wait and see.

If your kids haven't seen the Star Wars movies yet, this could be a good outing for them. For the utter die-hards... nothing I say will stop you anyways, so you might as well go. For those who want something really amazing... well, you might not walk out as impressed as you walked in. Still, on a technical level this was one seriously amazing conversion, even if it did take them a few years to add the extra dimension.

My husband attended a sneak preview of this 3D edition of Star Wars episode 1, The Phantom Menace. Prior to attending the movie he was really in two minds about going. He is a huge fan of the Star Wars franchise. Episodes 4, 5 and 6 being of course his all time favourites, he has played computer games, tabletop games and read many many books relating to the characters and world that the Star Wars franchise encompasses.

But episode 1 has something that 4, 5, and 6 do not have. Something that makes him feel ill. A little character called Jar Jar Binks. This in itself was enough to give him second thoughts about going along. Still, he decided to brave it out.

His first impression of the 3D aspect was that it was well done. He was vaguely expecting the 3D to be crap because it was originally shot in 2D. Generally with a 2D to 3D conversion, the 3D looks much like a view master image. It tends to be jarring and pointless. But with this movie he was pleasantly surprised that the 3D was nicely done, rounded and realistic. He did say there were some scenes where the 3D added nothing, but then other parts where the 3D was awesome.

He had forgotten that the storyline was so strong, and interesting and he very much enjoyed most of the movie. Unfortunately, that Jar Jar Binks was still just as jarring. He felt sickened whenever Jar Jar bounced into a scene, and that still colours his opinion of the overall movie.

He probably wouldnâ ™t pay to see this movie again. But Iâ ™m sure that if they added 3D to episode 4, 5 and 6 he would be there with bells on.