« Go the F*ck to Sleep review 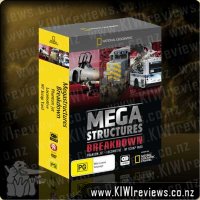 The Biggest Recycling Job On The Planet

If you think constructing colossal buildings and mega machines is a challenge, wait till you see the difficulties and danger involved in breaking them down!

We'll join crews from all over the world as they knock down, deconstruct, and recycle some of the biggest structures in the world in this enthralling series.

I was always one of those kids who enjoyed taking things apart to see how they worked. Sometimes, I was even clever enough to put them back together again. On even rarer occasions, they still worked afterwards! This series really appeals to the 'deconstructer' in me...

Now to some, watching how a diesel locomotive is disassembled safely would be dry fare indeed... same too with watching a scrapyard in action for a day... but if any male can tell me that watching a fighter jet being decommissioned is dull... they need to have their head examined... because it is just way-cool watching fighter planes being disassembled!

I have to admit, the most entertaining episode had to be the scrapyard. It's a family business... and they say you should never flat with, work with, or work for, family... and this place is amazingly complex, with half the staff either being, or married to, the offspring of the main bosses... it makes for 'interesting days' when the big boss is on the warpath.

Overall, for the price it's pretty good fare for those who enjoy learning and seeing how the world works, one little slice at a time. For those who demand more active viewing... maybe not your thing.

The existence and the identity of the Holy Grail is one of the most enduring mysteries of all time. Dan Brown's 'The Da Vinci Code' claims to be based on much research and fact, revealing the existence of a hitherto secret organisation supposedly set up to protect the Grail in the 11th century.

It identifies Leonardo Da Vinci as one of the few in history who are in on the secret - one that can only be revealed in code. Tony ... more...