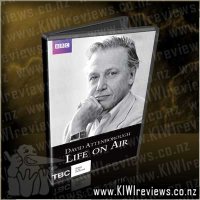 Sir David Attenborough has traversed the globe capturing some of the most incredible moments in natural history film-making, entertaining and informing viewers about the natural world.

Presented by Michael Palin, Life on Air is a celebration of David's career in broadcasting - a lifetime in front of the camera, travelling the world and bringing the mysteries and beauty of the natural world into millions of homes world-wide.

Utilising archive footage and interviews with both David and key figures in his career, Life on Air reminds us of some of his most unforgettable moments, revealing the extraordinary history of his life in broadcasting.

I've grown up being totally fascinated by the documentaries Sir David Attenborough has presented and narrated, loving his relaxed, humourous style that would keep me hooked right through the entire documentary each time, unlike some of the presenters out there who can sometimes drone on and on, making it hard to follow or remain interested. "Life on Air" is an informative, funny, enjoyable look at Attenborough's life, with snippets from interviews (which regularly had me laughing!), behind-the-scenes footage, and the actual documentaries. It was rather interesting watching the changes in natural history documentaries over the years, and learn about Sir Attenborough's early beginnings... I never knew he was the one who got the BBC started!

This is not really a DVD I'd pick out for younger kids, maybe 10 years and older would find it interesting, but younger children would probably find this rather dull for a documentary. Also there are a couple of sections that may not be overly suitable for children... a couple of typical Tribal nudity scenes where Attenborough and his film crew are required to strip down to nothing more than a cloth covering certain parts to match the tribe they are visiting, and also a section where Attenborough shows how he has never been a man who has shied away from the harsher side of the natural world, by showing a poor Colobus monkey hunted, killed, and ripped apart by a family of Chimpanzees.

All in all, a thoroughly enjoyable look at the life of a truly great man with a very obvious love of the natural world, who has brought us so many amazing documentaries, and will hopefully bring us a few more! Definitely worth adding to the collection if you have ever enjoyed a Natural History documentary presented and/or narrated by Sir David Attenborough.

This six-part documentary series on the British Royal Family takes viewers on a journey through all facets of Royal life in all its grandeur, splendour and even controversy, providing the definitive peek into the fascinating world inhabited by these beloved monarchs.

Join us on a journey of discovery through the mesmerising world of The Royals. Featuring: Royal Weddings, Royal Scandals, Young Royal, Royal Funerals, Royal Pets and Royal Babies - including the coverage of Baby George.