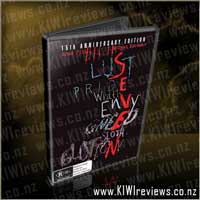 John Doe, a profoundly terrifying killer, is carefully and methodically exacting punishment on those who indulge in the ultimate vices.

Detective Somerset is only a week away from retiring from his job at a New York City precinct. Detective Mills has been transferred to the city and is anxious to pick up where Somerset leaves off.

As the two detectives working together close in, John Doe patiently awaits the final confrontation determined to complete his bloody masterpiece of terror.

Another Kevin Spacey classic? Definitely. This is more in line with the chilling, demented films that I have come to associate with Spacey. Acting alongside Brad Pitt and Morgan Freeman, this star-studded film was put under pressure to deliver.

In my eye, a great gore film, is one that follows rules. not just deciding, I'm going to kill. A true killer and villain, is one that carefully chooses his victims, and leaves clues that could in fact get him caught. That is the equation that creates a man that you do not want to mess with, or be caught in the sights of.

This film follows two detectives attempting to catch a serial killer, that appears to be using the words of the bible as a inspiration, dealing with the 7 deadly sins (and thus the movie title). A chilling and graphic rendition of religious extremists, this movie was exciting and full of tension, as the heroes rush to try locate the killer(s) before the next victims reach their end.

I particularly enjoyed the graphic novel that came wit the special edition. I didn't read it until after the movie, but it serves to fill in the moments before the movie, relating to the first murder for 'gluttony'. The cross-medium manner was a nice touch, that impressed me.

The title of this movie has popped up every now and again for me over the past 5 years. Each time I've seen it I've gotten more and more interested in watching the movie. I actually went so far as to go online and read the plot.

Two weeks ago I finally rented it.

I can tell you one thing, having already read the plot did not diminish this movie at all for me. The horror at how long this one, insane, man took to complete his 'life's work' is horrifying, and yet it seems so real and you can unfortunately imagine someone doing this in real life.

The storyline was great, the acting from Morgan Freeman was great, but Brad Pitt just seems to piss me off no matter what role he is playing, so half the time with his character I was just plain annoyed.

Still, a good movie, and while I am glad that I can say that I have now seen this movie, I'm not so sure it's one I'm bothered about seeing again.

Fifteen years ago, I found out just how ugly the human species could be, and what kind of depraved acts a suitably deluded zealot could perform in the service of their mania. It was also the first time I had encountered the three lead actors in roles I *didn't* want to remember them for.

Since then, I have aged, grown worldly-wise in the ways of human insanity, watched religious fanatics blow themselves up, fly planes into buildings, pick up guns and open fire into crowds... and nowdays this movie seems almost... relaxed. Until you once again remind yourself of the dedication someone will put into a task that could end your life in a most horrifying fashion. From movies such as this, came others along the lines of 'Saw' - where the horror comes with a moral tale, that life is to be treasured and made wonderful, not taken for granted or abused and wasted. Talk about shock therapy!

The scenes are graphic, though nothing compared to those seen in video games nowdays, where the more realistic the bloddspray is, the better it sells... but the pychological horror still has the power to reel you in and make you glad you don't live in a neighbourhood like New York.

The bonus features in this edition are great, with the main disc carrying 4 bonus audio commentaries, and an entire second disc packed with extras, such as deleted scenes and extended shots, alternate endings, a photogallery, production notes and more. As well as that, it comes with a 32-page comic... sorry, graphic novel... that is the prelude to the movie, covering the events leading up to the death of the Gluttony victim.

Overall, it could easily be said that at under $25 this is a great purchase. If you like those movies that leave you with chills, such as 'The Bone Collector', 'Panic Room' and 'The Silence of the Lambs'... then this is going to be right up your alley... if you were too young to see it when it first came out.