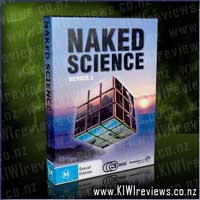 An exciting new series that unveils the truth behind some of the most popular and controversial scientific topics of our time.

Each episode, using the latest CGI techniques, takes the viewer through the various threads of scientific investigation, following leading experts and researchers as they sift through the evidence revealing fascinating stories and thrilling new investigations.

After watching the first series I was expecting quite a lot from this set... and I am very pleased to say that I was not let down in the least. 3 DVDs, packed with over 10 hours of entertaining, informative and amazingly engrossing knowledge in a highly accessible format. Rated M, this set isn't suited for the wee ones, particularly my favourite episode, 'Bullets' which can be a little disturbing for younger minds.

However, another episode on the same disc, 'Spacemen' was extremely entertaining to my 9 year old son, who happily sat through it with me there to help answer some questions, explain a few things, and generally 'censor' anything I thought a little rough... none such in that episode at least.

In fact, of all the 14 episodes, I would say only 1 or 2 had content worthy of adult concern. Your standards may vary from mine though, so best you watch them all yourself and decide what is and is not suitable for the kids, as the method of presentation is aimed at an audience a bit younger than warrants an 'M' rating. After all, Series 1 was only PG!

Overall, without giving you a summary of each of the episodes, all I can really say is that this is an excellent follow-on, and should be found on the shelves of any knowledge-welcoming person's library, and quite probably a good addition to the reference library of homeschoolers of early-teens, as they tend to be still open to this style of presentation, but mature enough to deal with the odd 'disturbing' concept. Though 'Bullets' was *my* favourite episode because of my interest in ballistics, I am not overly convinced it was a smart topic to pick for a show such as this.

Rene is the most wanted man in occupied France. Women want his body. The resistance wants his brain. The Nazis want his sausage!

'Allo 'Allo! follows Rene Artois - cafe owner in the Nazi-occupied French town of Nouvion, and his efforts to appease a range of opposing factions - including the French Resistance and the German SS - without being killed.

With the German army practically in residence in his cafe, Rene risks his ... more...