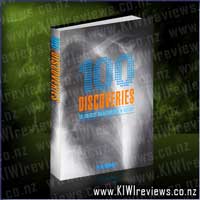 Throughout history, momentous, enabling discoveries have led to a giant leap in our understanding of the workings of the universe and fast-tracked human progress. '100 Discoveries' presents, in roughly chronological order, the greatest 100 breakthroughs in science and technology, medicine, exploration n the majo areas of human endeavour of the past 10,000 years

One of the best things I found about this book was the explaination at the front, by the author. It explained his reasoning as to why he selected the 100, why they were ordered the way he did, and the linking logic between them all. This made the book's little ambiguities and apparent jumps in time and/or context far more 'acceptable' to a logical reader such as myself, without reducing it's appeal to a wider, non-scientific readership.

Starting back before recorded history, and taking some amazing leaps through time, especially in the first dozen of so 'discoveries', this book not only reveals the trend of technology, but also the basic discoveries upon which further inventions were based. Real "...standing on the shoulders of giants..." stuff.

Ultimately, this is a reference book suitable for a limited number of fields... great for school teachers and homeschooling parents of older children, this is also interesting, and sometimes fascinating, reading for those who just enjoy feeding the squishy grey animal between their eardrums.

Overall, a great title to have on the bookshelf in preparation for enhancing the brainpower of anyone interested, though it may be one that gets a little dusty between uses in most households.

It's been only months since Eragon first uttered "brisingr", an ancient-language term for fire. Since then, he's not only learned to create magic with words, he's been challenged to his very core.

Following the colossal battle against the Empire's warriors on the ... more...