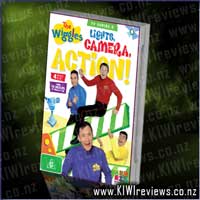 Disclosure StatementFULL DISCLOSURE: A number of units of this product have, at some time, been supplied to KIWIreviews by the company for the purposes of unbiased, independent reviews. No fee was accepted by KIWIreviews or the reviewers themselves - these are genuine, unpaid consumer reviews.
Available:
November 2008

Don't be a couch hot potato, it's time to dance along and sing along with the fab four of fun in The Wiggles TV Series 3.

In Lights, Camera, Action, Wiggles!, The Wiggles have made television for children in their own unique way - full of fun, music and entertainment - transmitted from their very own Network Wiggles.

Featuring the four Wiggles and their friends, the show gives a behind the scenes look at Network Wiggles where things don't always go according to plan. Greg handles the news, Anthony runs a workshop where children create things, Murray organises a music session and Jeff is featured as part of a Wiggly community service announcement as well as on the game show 'Where's Jeff?'.

Plus there is lots of singing and dancing with Dorothy the Dinosaur, Wags the Dog and Henry the Octopus.

This DVD series was excellent and well worth the money you would spend as you get four discs in the case.
My two year old boy has watched these Dvds so many times Im surprised they havent worn out!
The variety is great in this series as it isnt just song after song but is broken up with other things such as Network wiggles where they talk about the weather and news in a fun and entertaining way.
Murray also has a music session which is educational as well as entertaining. He discusses different instruments and has people playing them.
Unlike some of the Wiggles Dvds these ones featured all the wiggles characters including the four wiggles, wags the dogs, dorothy the dinosaur and Henry the Octopus.
I would definately highly recommend this disc series, great value and entertainment.

Featuring six classic Clarkson Specials from 1996 - 2002, this collection is an absolute automotive feast.

See Clarkson unleashed as he is sent on a mission to find the best and worst cars ever made, puts some of the most outrageously fast cars ever built through their paces, takes driving lessons to new and uncharted heights, and puts Japanese silicone wizardry to the test against European style.