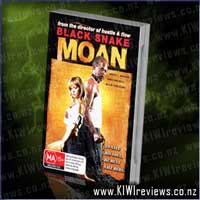 Disclosure StatementFULL DISCLOSURE: A number of units of this product have, at some time, been supplied to KIWIreviews by the company for the purposes of unbiased, independent reviews. No fee was accepted by KIWIreviews or the reviewers themselves - these are genuine, unpaid consumer reviews.
Available:
December 2007

Bitter and broken from a cheating wife and a shattered marriage, Lazarus' soul is lost in spent dreams and betrayal's contempt, until he meets Rae.

Half naked and beaten unconscious, Rae is left for dead on the side of the road when Lazarus discovers her. The God-fearing Lazarus quickly learns that the young white woman he's nursing back to health is none other than the town tramp from the small Tennessee town where they live. Worse, she has a peculiar anxiety disorder.

He realises when the fever hits, Rae's affliction has more to do with love lost than any found. Abused as a child and abandoned by her mother, Rae is used by just about every man in the phone book. Her only hope is Ronnie, but escape to a better life is short-lived when Ronnie ships off for boot camp. Desperation kicks-in, as a drug-induced Rae reverts to surviving the only way she knows how, by giving any man what he wants to get what she needs, until Lazarus.

Lazarus decides to cure Rae of her wicked ways. He chains her to his radiator, justifying his unorthodox methods with quoted scripture. Unleashing Rae emotionally, Lazarus unchains his heart, finding love again in Angela. By saving Rae, he frees himself.

The Call of the Wild

On the surface, this movie comes across as rather quiet and bland, but when you look deeper, you find a touching story of two people, equally troubled by their pasts, who help each other to emerge from the pain and suffering they've been going through, into a stronger sense of self where at last, they might just be able to find happiness.

With a blues-filled soundtrack (quite enjoyable if you like that type of music, and VERY fitting to the movie), and great hard-hitting performances by both Christina Ricci and Samuel L. Jackson (two actors I rather enjoy as I have hardly seen any movies with either of them that haven't been worth watching), Black Snake Moan is worth having in the collection, although it may not be one that gets played all that regularly. Even Justin Timberlake's performance (although still reasonably weak... why am I NOT surprised there?) was bearable as Rae's army boyfriend who suffers problems of his own.
Definitely a nice change though from the usual collection of action, soppy dramas, comedies, and fantasy based movies that have been coming out lately.

The first Disney animated feature based on historical fact, "Pocahontas" tells the story of the meeting of the English settlers in Jamestown with the local tribe of Powhatan Indians. The adventurous young Indian woman Pocahontas, along with her constant companions, Meeko, a raccoon, and Flit, a hummingbird, visits Grandmother Willow, a counseling tree spirit, because she is uncertain about the path her life should take.