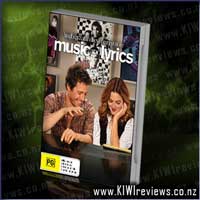 First you're hot, then you're not- and then you're Alex Fletcher. So when the sizzlingest tween queen on the charts asks the has-been '80s pop sensation to write her a song, he grabs another chance at stardom. Problem: Alex can say it with music, but he sure can't say it with words. Enter Sophie Fisher, his beguiling if quirky plant lady, who has an unexpected green thumb for lyrics. Together, they go after songwriting success - and discover that if you want to write the perfect love song, it helps to fall in love.

With Hugh Grant and Drew Barrymore at the keyboard and Marc Lawrence (Two Weeks Notice) directing, Music and Lyrics is a witty, wacky romantic comedy that faces the music- and laughs!

I went to see this with my mum when it came out and loved it right away, from the romance to the comedy to the singing I was hooked.

Alex is a former pop star stuck doing reunion after fair show after reunion following his unsuccessful attempt at a solo career. Sophie is his new plant lady who is a bit of a hypochondriac and more than a little quirky. When the latest teen sensation asks Alex to write her a new song he ends up teaming up with Sophie to write what they hope is a new hit song. Along they way they learn about each other and of course, begin to fall in love.

I really liked the songs in this movie, they were the winning point for me. "Way Back Into Love" is a fun duet and then "Pop! Goes my Heart" was brilliant. When it first came on, right at the start of the movie, it really hooked me into the whole thing and completely fit in with the vibe of the movie and former pop group (it's my guilty pleasure on my MP3 player). Everything was done well and I ended up buying this when it came out on DVD and watched it several times in the first two weeks.

One of the best movies I have seen Hugh Grant in.

I have enjoyed Drew Barrymore in most of the movies she's been in, ever since I was a kid, whereas I've disliked Hugh Grant for almost as long- so I wasn't really sure what to expect with this movie, but thought what the heck, let's give it a go! At first, it looked like it was going to be a typical Hugh Grant movie- rather corny and dull. But after a while it started to warm up, and before I knew it, I was actually enjoying the movie. The songs were quite catchy and I was rather surprised to hear Grant and Barrymore both had pretty good singing voices. Light hearted, with a good dose of romance thrown in, but not so much that it's sickening, this is one of Hugh Grant's better movies, and one I'm guessing I will be watching again.

Sworn to protect the world that both loves and hates them, the X-Men are a group of heroes both blessed and cursed at birth with mutant abilities that set them apart from mankind.

Gathered together by the mutant telepath Professor Charles Xavier in hopes of bridging the gap between mutants and mankind, the X-Men have been trained to ... more...