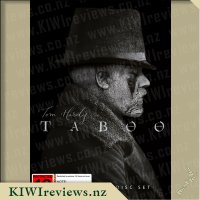 If you are a fan of the types of on screen series, that are dark and twisting, then this is for you. Set in the 1800's there is a twist of magic hidden between the harsh realities of the period, and the dark brooding main character James Delaney. James return to his home-town is not warmly recieved, and he proves very quickly to be the thorn, in some influential people's sides.

James character is a typical rough, bad boy, who has a heart of gold, and when push comes to shove, he steps in to support the under dog. This is a coarse time, and the series does not sugar coat the struggles of daily life, or the greed and debauchery, of some of societies elite. He proves himself a worthy adversary to the powers who aim to take him down. James is a man who has had a lot of time to think about how to get revenge on those who have wronged him, and he uses everything at his disposal to fight for what is rightly his.

James has had a relatively unknown life since he departed London as a young man, as the series unfolds we see glimses of James past experiences in Africa, this was a primal time, that helped shape his character into the man he is today. As the story unfolds the reasons James left town begin to emerge, and they include his affair with an unattainable and off limits woman. I can't share any more of the twists, you will have to watch to find out more.

I found this a series that I could not stop watching, each episode had twists and more dark secrets which kept emerging, the story grew in complexity and I had to keep watching to see how it all unfolded. This is a great watch for those who like dark, historical dramas, but be warned it is not for the faint hearted.

When college senior Anastasia Steele (Dakota Johnson) steps in for her sick roommate to interview prominent businessman Christian Grey (Jamie Dornan) for their campus paper, little does she realize the path her life will take.

Christian, as enigmatic as he is rich and powerful, finds himself strangely drawn to Ana, and she to him. Though sexually inexperienced, Ana plunges headlong into an affair -- and learns that Christian's true sexual proclivities push the boundaries of pain and pleasure.