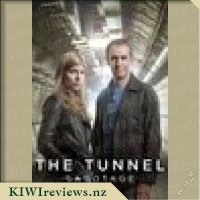 We had only just finished watching the first series and went straight into the second. Maybe because of this fact I really enjoyed it. I was used to Elise and her quirky personality and so was not as shocked. It also helped I knew the procedure it would follow and easily adapted between english and french and reading the subtitles. I seemed to follow this series easier then the first and found I enjoyed my weekly dose of this crazy show. Only eight episodes long it is over before it really begins.

I don't think you need to have seen the first series to begin with as it is a completly new crime but it does help in the introduction of all of the characters. I enjoyed that Elise was trying to be more 'socially aware' and was trying to be more 'normal' or as normal as she will ever be, and less like the robotic way she was in the first series. It was also nice that they explored her sexuality and made her more likeable. Actually this season felt like, at times, that it was more about Karl and Elise and their personal life then the actual case.

The case jumped around a lot and there were some large jumps but it tied up nicely in the end, (although not the closure you would expect or wanted). I would not call this a predictable show at all. It is refreshing sitting back and just watching something that you could never guess what would happen next. Not the sort of programme to watch while you are tired or preoccupied as there is a lot of reading to do and jumps between English and French during actual sentences, so you needed to be on your game.

Semi-retired policeman Henry Crabbe (Richard Griffiths) would rather be cooking than catching criminals.

Unluckily for him, he happens to be good at both. His boss, Assistant Chief Constable Fisher (Malcolm Sinclair) doesn't want to lose him, and his accountant wife, Margaret (Maggie Steed), worries his new career as a restaurateur won't be financially viable.

While indulging his culinary passions, Crabbe remains on call for those particularly tricky cases that Fisher sends his way. Larger than life as he is, sometimes there just doesn't seem to be enough of Crabbe to go around.