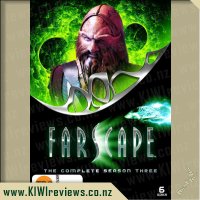 The third season of Farscape explores the wonders, possibilities and dangers of the wormhole phenomenon more completely than ever before. Through more ominous, adult-themed tales, the series also peeks into the darker corners in the minds of Moyaâ ™s crew.

In Season Three we are taking off right where we left off, with the chip having been removed from Crichton's head, but straight away they decide to hit us with an ethical issue and wether or not donors who are still alive should be used or not, a really good ethical dilemma and done really well, the sci-fi aspect doesn't affect how relevant it is to us today or our near future. We get three two parter episodes throughout this season, all pop up with at least a couple of single stories between them, so it didn't feel overwhelming at all, as sometimes it can when there are too many.

The good thing is that they don't really travel far and keep on bumping into various characters and family members that there are, we even bump into one or two from back in the first season, so it all ties in rather well. The special effects in this are rather well done and the range of aliens and weaponary that there is is great, I especially love Moya and Talyn and the way that they look and function, I mean, living ships is pretty awesome I reckon! Another fun and well done season for the world of Farscape.

The question on everyone's lips will finally be answered when Sherlock returns - how did he do it?

Two years after the devastating events of The Reichenbach Fall, Dr. John Watson has got on with his life. New horizons and romance beckon in the shape of the beautiful and smart Mary Morstan. But Sherlock Holmes is about to rise from the grave. And even though it's what his best friend wanted more than anything, for John Watson ... more...