ProdID: 5743 - Any Given Sunday
Directed by Oliver Stone 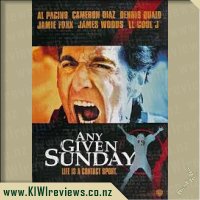 Any Given Sunday product reviews

Life is a contact sport and football is life when three-time academy award-winning filmmaker Oliver Stone and a dynamic acting ensemble explore the fortunes of the Miami Sharks in Any Given Sunday. At the 50-year line of this gridiron cosmos is Al Pacino as Tony D'Amato, the embattled Sharks coach facing a full-on blitz of team strife plus a new, marketing-savvy sharks owner (Cameron Diaz) who's sure Tony is way too old school. An injured quarterback (Dennis Quaid), a flashy, bull-headed backup QB (Jamie Foxx), a slithery team doctor (James Woods) and a running back with an incentive-laden contract (LL Cool J) also provide some of the stories that zigzag like diagrams in a playbook. and throughout, there's the awesome spectacle of motion, sound and action orchestrated by Stone.

I have never been a huge fan of American football; I've never really attempted to follow it, or even try to understand the rules, so when the film opened with a football scene, I was apprehensive. This was a flatmates movie, and I was intrigued by the mass accumulation of big names; Al Pacino, Jamie Foxx, Dennis Quaid, James Woods, and even Cameron Diaz.. So I sat there and gave it the benefit of the doubt.

Luckily as with most sports films, it focuses a lot more on the emotional atmosphere of the game, and required no knowledge of the rules or tournament structure. You could just tell by the cheers and jeers, what was good and bad.

I enjoyed this film, and how it delved into the behind-the-scenes drama. There was a lot of attention paid to the dark-side of the game; the injuries, the health risks, and the financial corruption. The predictable events occurred, but there were other less predictable parts that provided variety to keep the interest. While the leading big name, with first mention, and the plot revolving around him, Al Pacino was not the primary character. His performance was secondary to Jamie Foxx's, and they provided quite an ego battle.

The fiercest Jurassic beasts are accurately brought to life and pitted against each other in a PRE-HISTORIC DEATHMATCH.

We knew some were enormous, we knew some were ferocious... but only now are we able to tell the truth about dinosaurs. New research has enabled biomechanics, CGI and special effects to create the most accurate ... more...