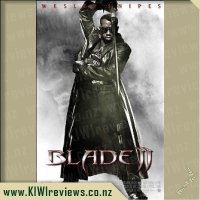 I only watched this film for the first time very recently, but I couldn't help but pause and look at the villain. Their "powers" and their physical mutations reminded me of the Resident Evil franchise. In fact they were almost exactly the same. Coincidentally, Blade 2, came out in the same year as the first Resident Evil film.
So this is effectively the birth of the Resident Evil movie franchise, which has spawned five successful movies to date (with a sixth in production).

That was possibly the best thing about this movie.

In reality, this new threat is a viable new enemy, that could have led to a new entourage of films if it had been done successfully, as opposed to being a one-off film villain. Instead they turned the new guy into the strongest, and most infectious thing out there...with daddy issues.

The flow of the entire movie felt off, in that it just felt like a continuation of the opening scene. There was no real let up. No break in the "action". It's not until the final scene of the film, where you suddenly get a break, and you get to wonder "where is this film going to take this?....oh wait it's almost finished".

Considering every movie so far has wanted to obtain Blade because he is special, it seems absurd that they haven't created any other Blade-like creations, when they know exactly what made him so damn powerful in the first place. Just kidnap pregnant women and then turn them into vampires! If that's how Blade can be immune to sunlight etc., then the vampires could have just killed Blade (and they have had many opportunities to) and just created an army of loyal 'daywalkers' [/spoilers]

All that being said, you get to enjoy the usual sword fights, but the bad vampires are just annoying. Did not really enjoy this one at all. It started off so well, but just ruined a potential long-term enemy.