« Out of the Furnace review 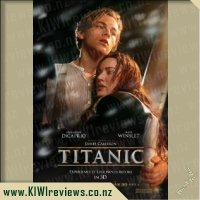 A seventeen-year-old aristocrat, expecting to be married to a rich claimant by her mother, falls in love with a kind but poor artist aboard the luxurious, ill-fated R.M.S. Titanic.

I am really fascinated by anything to do with the Titanic, have read heaps of books and theories about the subject so when this movie was done I knew I had to see it even if I had to wait until it was available on DVD.

I did enjoy the movie, but I did spend time wondering how the people could possibly know if there was a romance but was good to see that although some things can't be verified and "dramatic license " had to be used that the main facts were correct. The special effects were fantastic, the ice berg looked real and you could see the effect the ice cold water had (it seemed real even though I knew it wasn't real just very clever effects ).

I would have watched the movie even if it did have the worst actors in the world in it and yes there are some movies I refuse to watch due to certain actors. I have actually watched this movie a few times, the romance between Jack and Rose is of no interest but it does help the characters seem more real.

I already knew the outcome of the story as the Titanic tragedy is very well known but that didn't stop me from enjoying the movie.

When this movie came out, I'm pretty sure that I was the only person in my entire class, perhaps one of but a handful in my whole school, who couldn't care less about this movie nor want to watch it at all, I remember half the fuss being about Leonardo DiCaprio. This brings the tragic story of the Titanic to life, which I will concede was a good thing as there were plenty of people who had no clue that IT WAS A REAL EVENT!!!! and I can recall thinking how stupid some of my classmates were for thinking it was just a movie...

I had zero interest in the romance story in this and while it is a sweet story I really don't feel like it was a real story, they just didn't bring the characters to life enough for me and I really didn't end up giving a damn if Rose and Jack survived or not (does that make me a bad person...?

). The moments with elderly Rose just struck me as being very cheesy and didn't add to the movie at all. I only ended up watching it as it was on TV and I figured that with nothing else to do I might as well watch it, I could have done a lot in the time it took to watch this (and not enjoy it at all). The only part that got to me was all the other characters being separated from each other, rather touching.

I remember seeing this at the movies and some young girls were in front of us and I heard them say 'don't worry the boat doesn't sink' and I thought wow that is so sad that girls are only coming to watch this because of Leonardo and have no real idea that this actually happened. Hundreds or people lost there lives because the ship crashed into an iceberg and they were not properly prepared for such an event occurring. With not enough life boats and the rich thinking they could take all of there luggage with them, there simply was not the room.

This movie is amazing. It is so touching as the ship bobs around on the surface before sinking to the depth of the ocean. Watching the people come to the realisation that they would not see another day is absolutely heart breaking. The scene were the two elderly people cuddle as it goes under brings a tear to your eye.

It is told beautifully with Rose relaying the events thru her eyes, telling a room full of people what truly happened on that maiden voyage. The various classes separated by gates. The panic after hitting the berg and how everyone reacted. Although this is based on a true story nobody really knows if Jack or Rose really existed there is talk that a romance did happen but if it played out like this no one knows for sure.

If you love action, drama, suspense and romance you will love this movie. Leonardo and Kate are perfect together and you can feel the love. I do love the end when Rose walks up to the deck and throws the necklace over the rails and then dies only to be reunited with her one true love.

Former cop Brian O'Conner partners with ex-con Dom Toretto on the opposite side of the law. Since Brian and Mia Toretto broke Dom out of custody, they've blown across many borders to elude authorities. Now backed into a corner in Rio de Janeiro, they must pull one last job in order to gain their freedom.

As they assemble their elite team of top racers, the unlikely allies know their only shot of getting out for good means confronting ... more...