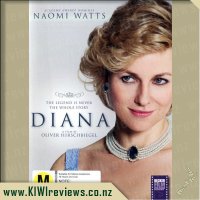 "Diana" takes audiences into the private realm of one the world's most iconic and inescapably public women - the Princess of Wales, Diana in the last two years of her meteoric life.

On the occasion of the 16th anniversary of her sudden death, acclaimed director Oliver Hirschbiegel explores Diana's final rite of passage: a secret love affair with Pakistani heart surgeon Hasnat Khan, the human complications of which reveal the Princess's climactic days in a compelling new light.

Like most people who grew up while Diana was in the limelight I followed her life throughout the years and I can still remember what I was doing the moment I heard the news of her death. When I saw a movie was being released about her life leading up to her death I decided that I would have to see it.

The movie begins showing the moments before Diana's death and then rewinds back two years. Naomi Watts did a wonderful job portraying a broken, hurt woman that Diana seemed to be in the years before her death. The emotions she showed throughout the movie drew you in and you felt every emotion she was going through.

While I enjoyed the movie the whole time I was watching it I couldn't help but think, they are basing this all on hearsay of other people how much of it is really true? The one person who really knows what happened is no longer able to tell the real story. The other disappointing part of the movie was that it focused a lot on her relationship with heart surgeon Dr Hasnat Khan and showed very little of her relationship with Dodi Al Fayed. As the movie ended with their deaths I feel it would of been better to show more of them together rather than just a couple of short scenes.

Unfortunately, her wish to be invisible is thwarted when her ... more...