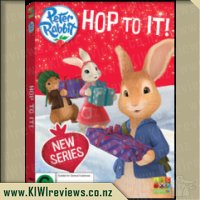 The new 3D CGI animated TV series is an inspiring and playful re-imagining of Beatrix Potter's timeless children's classic. Join our hero Peter and his friends Benjamin and Lily as they encounter real dangers, overcome obstacles and outsmart predators, all while finding fun and excitement in the most unexpected places.

Follow Peter as he solves the mystery of the radish robber; brings home Mr. McGregor's cat by mistake; tries to rescue Lily from Mr. Tod's trap, and lots of other daring adventures.

I absolutely adore Beatrix Potter and we have a lot of her story books so I was excited to see the DVD Hop To It! My girls haven't really enjoyed watching the one dimensional Beatrix Potter cartoons so I was interested to see how they would enjoy this "modern" offering.

Miss Seven, Miss Six and Miss Three have had this as a viewing option for exactly a week and interestingly every time I have told them they can watch a DVD this is what they have all chosen to watch. I thought that this wouldn't be that enjoyable for Miss Seven but she was just as engrossed watching it as her younger siblings. She told me that she really liked it and it was fun to watch. Miss Three told me that it was funny and giggled when I asked her to tell me about it. I had thought she looked quite scared when watching Wiley Mr Fox and Badger trying to catch that mischief Peter but when she told me about the story she said that he was a naughty Fox and he was very funny when he and the other big bad animal (Badger) were trying to catch the rabbits. She also loved talking about Mr Mc Gregors cat (another character I thought she would have found a bit scary!)

This DVD really has brought to life Beatrix Potter and although it is is very modern and doesn't have the rustic charm of the original drawings the story is definitely captivating and enjoyable. I didn't enjoy the sound track that much but the children didn't seem to mind it and I think barely noticed it as they were so intent on watching everything that was happening on the screen. This DVD has 6 episodes lasting a total of 83 minutes so you can break the DVD watching into small viewing periods or just let them sit and watch it from beginning to end. I really like the ability to be able to say "right end of this episode turn it off"!

Overall I think that this DVD is very good value and that the original Beatrix Potter stories have been given a lovely modern visual makeover without losing the essence of a timeless classic.
With Easter coming up this would be a great addition to the DVD library for your younger children.

The first in a planned series of shows detailing the Marvel universe, "Daredevil" follows Matt Murdock, attorney by day and vigilante by night. Blinded in an accident as a child, Murdock uses his heightened senses as Daredevil, fighting crime on the streets of New York after the sun goes down. His efforts are not welcomed by powerful businessman Wilson Fisk -- aka Kingpin -- and others whose interests collide with those of Daredevil. Though ... more...