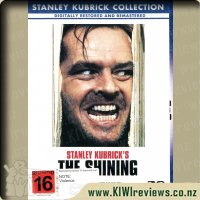 Frustrated writer Jack Torrance takes a job as the winter caretaker at the ominous, mountain-locked Overlook Hotel so that he can write in peace. When he arrives there with his wife and son, they learn that the previous caretaker had gone mad. Slowly Jack becomes possessed by the evil, demonic presence in the hotel.

Watching this movie 33 years after it was released, I was pleasantly surprised at how much of this film I hadn't seen before. One of the most parodied movies of all time, I have seen many parts of the movie, shown in such programs as 'The Simpsons', 'Gilmore Girls, 'Remington Steele', and even in Tim Burton's 'Alice in Wonderland'. I had expected to have this film be a uninteresting compilation of the parodies that I had seen, but it proved to still have many shocking parts.

A psychological thriller, it follows a simple storyline of a family cut off from the outside world, and having to deal with the maintaining sanity in seclusion for extended periods of time. Facing an increasing number of delusions, violence inevitably ensues.

Containing only a couple of scenes that require a lot of special effects, this movie does incredibly well, relying almost solely on the talent of the actors. Jack Nicholson proves to be the perfect lead for this film, and I was quite surprised at how many of his lines were improvised; such as his use of the pop culture reference "Heeeere's Johnny!".

This is a thrilling movie, that has triumphantly stood the test of time.

The Shining is one of those movies that is embedded in pop culture, yet today was the first time I had ever watched it.

The basic premise is that Jack Torrence takes a job as caretaker for the Overlook Hotel, over the winter, whilst it is closed, leaving just himself, his wife and their son. Their son has 'the shining' which basically means he has a link to the supernatural, and whilst this is going on Jack is on the slow descent to madness. If you compare this to most horror movies today it has a lot less gore, so that's why I see this more as a thriller.

This is a rather slow paced movie, however, the music along with the setting and the great acting meant that I was actually starting to feel rather spooked, which doesn't usually happen for me, and when the movie ended and the room was dark, I have to admit that I was slightly on edge! There's some really nice aerial shots and a great shot (filmed as one continuous shot) when Danny is riding his trike through the halls of the hotel. Whilst I knew most of the ending, due to some scenes popping up in shows now and again, the full ending was a surprise (and a bit confusing) but very well done.

I would happily watch this again and may even look at getting this on DVD.

Score: 7.8
Product reviews for listing 7860: Battle Of The Sexes
Directed by Jonathan Dayton and Valerie Faris