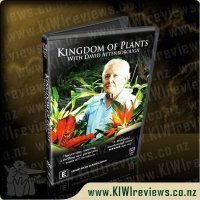 Disclosure StatementFULL DISCLOSURE: A number of units of this product have, at some time, been supplied to KIWIreviews by the company for the purposes of unbiased, independent reviews. No fee was accepted by KIWIreviews or the reviewers themselves - these are genuine, unpaid consumer reviews.
Available:
April 2013

In this sensational series, shot over the course of a year, Sir David Attenborough explores the lives of plants and their fascinating world, from the most bizarre to the most beautiful.

Using beautifully shot footage to illustrate his own inimitable narrative style, David traces them from their beginnings on land to their vital place in nature today, exposing new revelations along the way. He moves from our time scale to theirs, revealing the true nature of plants as creatures that are every bit as dynamic and aggressive as animals.

And he does all this in one unique place, a microcosm of the whole plant world where some 90% of all known plant species are represented: The Royal Botanic Gardens, Kew. This spectacular adventure through the Kingdom of Plants is so immersive and compelling it has the capacity to amaze even the least green-fingered.

1 DVD including all three episodes from the series Life in the Wet Zone, Solving the Secrets and Survival and as a special feature The Making of David Attenborough's Kingdom of Plants.

The Leftovers: Season One
Rating: 9.0

As stated on the cover by David Attenborough "the whole experience is just entrancing and hypnotically beautiful". I have watched many of David Attenborough's programmes on television as I have grown up and have always loved learning about the world we live in but this DVD takes the "Kingdom of Plants" to a whole new level.

I have been to Kew Gardens in Richmond, England but now have a new-found appreciation for just what an amazing place this is. This DVD is based on a year's footage from all around the gardens and inside the hothouses, rainforest building etc and is incredible to watch. The technology available today to those producing this natural extravaganza has resulted in the most detailed and vividly clear film of the daily life of plants, and the insects so closely and intricately involved in the reproduction and growth of these plants. The ability, using techniques such as time lapse photography and being able to slow down film, to depict what happens in a mere millisecond is simply mind blowing. I found myself absolutely riveted to the screen watching this. What is even better though is that your children will be riveted also. All three of my Little Misses thought this was amazing especially shots such as plants eating insects and watching the tendrils of a creeper whip round and round like a lassoo until they grab hold of something. Now when they ask questions such as "how do plants grow?" etc I will be able to whip out the DVD and they can see in amazing high definition for themselves.

I can't even begin to explain how absolutely amazing this DVD is. Even if you have absolutely no interest in plants this is still absolutely stunning to watch. Although David Attenborough's voice is a little more mumbled with time you want to hear every word he says because this is so interesting and so informative. What I really liked about this DVD is that there is included "The Making of The Kingdom of Plants". This is just fascinating to watch as I had never really thought too much about how programmes like this are made and produced. I am, as a result of watching this DVD twice over now, wanting to purchase his other recent DVD's as if they are anything near as good as this I am a natural history convert!

This gets a 10/10 from me and I would totally recommend watching/purchasing this and David Attenborough's other recent documentary's. A visual feast for the eyes!

The existence and the identity of the Holy Grail is one of the most enduring mysteries of all time. Dan Brown's 'The Da Vinci Code' claims to be based on much research and fact, revealing the existence of a hitherto secret organisation supposedly set up to protect the Grail in the 11th century.

It identifies Leonardo Da Vinci as one of the few in history who are in on the secret - one that can only be revealed in code. Tony ... more...