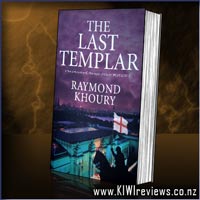 Sam Reilly leads the FBI's investigation, helped by Tess Chaykin, an archaeologist who witnessed the shocking theft. She takes him through the dark history of the crusading Knights and together they are plunged into a terrifying journey which forces them through the sewers of New York, to the barren Turkish coastline and to the highest point of command at the Vatican.

THE LAST TEMPLAR is a meticulously researched and thought-provoking thriller that combines harrowing contemporary suspense with epic chapters set in the middle ages. What is the truth behind the persecution of the Knights? The answer has the power to shake all modern religions to their very core.

The big book of everything for boys
Rating: 9.5

This was a pretty good book. Not great, but an ok read... in fact I am surprised it wasn't better. It had a lot of the elements that usually get me excited about a book. It had Templars, treasure, romance, thrills, adventure... yet somehow it fell slightly short of the mark. It gets oh so close to engaging the reader, and then shifts on to the next chapter, leaving you always a bit disappointed. It took me three quarters of the way through to finally get into it! Also I found that every so often throughout the story it would refer to something that you hadn't actually been told. For example at one point the main female character (Tess) is explaining to a group of FBI agents what the Templar knights were and how they came about, and how their downfall occurred.
The next page one of the other characters referrs to something that Tess is supposed to have said (his exact words were '...You said it almost worked. What the king and the pope set out to do'). Now I freaked out a little when I got to this other character's line because I have a bad habit of breaking into skimming rather than fully reading something then I go back over things a second time to make sure I had the right idea. So I go back and reread what Tess has said, and then I read it again. The third time I go over it I realise she said no such thing. And then I got annoyed... and then I got more annoyed when it happened a few more times. It is just a little thing that detracts from the reading experience.
Descriptions and scenery could have been a little better, but I loved the intermittent jumps back into history - they somewhat kept the story that little bit more interesting. I really would have preferred a different ending however. This one was a bit wishywashy. You know when you run out of stuff to say so you say 'and then I woke up and it was all a dream'? Not quite one of those, but it all ended a little neatly, and somewhat unimaginatively.
Still, I guess the author achieved one thing, since I think I will read this book again, just to make sure I didn't miss anything...

A search for the truth about her father's death takes schoolgirl Peta
Jones to a dangerous place, where she discovers that what some people
will do for money, she will do for hope.