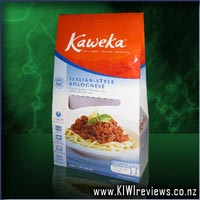 Kaweka's Italian Bolognese is a world away from the well-known 'spag-bol'. Our recipe is an authentic, thick meat sauce that's popular with hungry young and not-so-young Bolognese lovers alike. And you'll only need a relatively small amount to coat pasta to give it that unmistakably authentic and evocative flavour of Italy.

Like all Kaweka meals, our Italian Bolognese contains no additives, preservatives, artificial colours or flavours. It's gluten free, low in carbohydrates and we use only tender NZ minced beef and pork.

This is a pleasnt dish that is neither overpowering in taste, nor is it understated either, it has just the right qualities to make this a meal that all Kiwis will enjoy, from the tender minced meat to the delicious sauce.

Whether you serve it with rice, or pasta, or even use it as the basis for a good old fashioned lasagne, this is a meal worth having in the cupboard purely for it's versatility if for nothing else.

This is one meal i'll certainly be keeping one or two of in the cupboard.

I heated this up for lunch in the tearoom at work and everybody asked me what smelled so great! I told them about the Kaweka reviews I was doing and by the time the Bolognese was ready everyone was just as anxious to see how it tasted as I was! I am a big fan of bolognese, so was looking forward to trying this one. I can think of lots of different things to do with this, so it is definitely a versatile product. Pasta and vegetables can be added to stretch it to feed more than two people.

Taste, I ate this on it's own without any additions and it was very nice as it was. It would have been even nicer with pasta and cheese. The flavour is very herby and tomatoey but it is not overpowering or too strong. The mince is excellent quality and does not taste fatty at all which is great.

Overall a great, versatile product which I would like to buy again.

OK so this is another favourite of mine, thou it rates higher than my overall favourite the Thai Chicken Curry this is only because I think this flavour has more uses. After getting one of these to try out for review, I went out and bought a whole swag more so I could experiment with it. I also bought a few more of the Chilli Con Carne sachets too. I was having a bit of a social Poker Night with the lads, and decided to make plenty of Nachos, but some of the boys have cast iron stomachs when it comes to poker, but which turn to baby tummies when it comes to food, so as well as the usual nachos made with the chilli, I made a couple of bowls using the Bolognese as well, which went down a total treat. A few nights later I converted some of this Bolognese into a Shepherd's Pie, by cooking up some mixed veges and a tablespoon of Whitlock's Picalilli and mixing them into the Bol, and covering with a mixture of mashed potatoe and breadcrumbs for the topping. Half an hour in the oven and it was ready to eat. This probably saved me about 15-20 minutes in prep time for the mince. This is one seriously tasty, highly versatile meal in a packet, better than many home-made varieties I have tried. Excellent meal Kaweka!

I had been given only two rules... rule 1 - taste all the flavours, rule 2 - experiment.

Rule 1...
I really quite liked the Italian-style bolognaise, I'm not usually a fan of pre-made since usually they fail abysmally to get anything about them right. So needless to say I approached tasting this version with some trepidation - it was also the first flavour I tried so I had no real idea of Kaweka quality yet. I was pleasantly, no, ecstatically surprised. Fantastic! Nice and rich, lots of meat, deep tomato-ey taste, not too herby - in fact the herbs were delightfully subtle. Not used as they are so often to mask a myriad of faults in the actual flavour of the food, but as flavour enhancers. As with the Chilli I found this one a little under salty, again not a recommendation for change but making others aware. After checking out the nutritional information, I found that it indeed has a nice level of sodium rather than being too high. High in protein which is good, a little higher in total fat than I would have liked with a third of that being saturated, so maybe be careful if you have cholesterol issues.
I didn't have any trouble with the packaging as I used the stove-top rather than the microwave.
Whilst I would normally make my own Spag Bol, this would be a great idea for lunches or just to have in the cupboard for those nights you are in a hurry or just don't want to cook.

We all have those.

Rule 2... experimenting!
Since there were three of us and only one of each flavour (which serves 1 - 2), I decided a little mixing it up wouldn't go astray. So I got one pouch of Chilli con carne, and one pouch of Italian-style bolognaise, mixed the two together in a pan adding to the bacon I had already sautéed, added a few secret ingredients and served the lot over spiral pasta with a sprinkle of Edam on top. It was a hit! The hubby said we "absolutely need more of these so we can properly review them *wink, nudge*" and the best part? The Ten-year old boy seal of approval! Not only did he ask for more, he said it was delicious...

Now, I am a bit of a connoisseur of Spag Bol variants, ever since I was taken to Tony's Restaurant in Wellesley Street, Auckland at the tender age of 4, and a kid-sized bowl of their mouthwatering Spag Bol was plonked down in front of me. Since then, I have tried every Spag Bol recipe I can find (I can recommend this delightful pork version BTW) from the whole spectrum of income brackets. (I am sorry Dryn, but boiled mince and a can of Watties Spag just doesn't cut it in any respect.)

When I saw this sitting on the supermarket shelf, I had a vague idea I had caught a glimpse of the adverts on TV at some stage, thought it could be worth a try, so threw it into the trolley with plans to try it out for dinner. Of course, it's always when I get home that i realise I have forgotten to buy something critical to the meal, and in this case... it was spaghetti. Thankfully, the ever-handy packet of 2-minute noodles came to the rescue...

So, after about 10 minutes prep time, and a couple of scorched fingertips (Yes, the pouch is really hot when it comes out of the microwave, be warned...) I had a bowl with a good base of beef noodles, then poured over the still-rather-temperate Kaweka Bolognese... a half-handful of grated cheddar cheese in lieu of the also-forgotten parmesan... and ready to eat, meal for 2.

Overall, the taste is quite pleasant, though I wouldn't rate it the best I have ever had, I would certainly give it top-billing in the "quick and easy, heat'n'eat" category... in the last few years since I started doing food reviews, I would have to say this is by far one of the most superior offerings... and of course, it's all Kiwi. The other top-5's are all Aussy offerings. Kaweka, you are on to a winner... Next shopping trip, I will certainly be considering checking out some more of your range. if they are even half as good, they will be worth every cent.

Chicken and Peri Peri in hotdog form - a new classic in the making.