Peter Jackson : From Prince of Splatter to Lord of the Rings review

ProdID: 94 - Soundtrack: Queen of the Damned
Performed by various 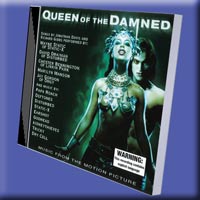 Music from the motion picture Queen of the Damned

This is quite possibly my favourite movie of all time. From back when vampires were still awesome (pre-Twilight). This movie combined vampires with music, in eerily yet exceptionally brilliant way. Often vampires, demons, and possessed people are portrayed by having an eerie voice that sounds like more than one person talking at once, and they mimic this in the music style as well. The original music composed by the front-man of KoRn, Jonathan Davis, he sings alongside other brilliant vocalist, to create a merged vocal style that is hauntingly good.

Featuring songs or vocals from Linkin Park, Static-X, KoRn, Disturbed, Marilyn Manson, and Papa Roach, it is effectively a compilation of some of my top bands. The entire album of songs follows a similar theme to Davis' original works, and is an absolute pleasure to listen to.

I first found it on sale in the Warehouse for $35, but being a bit expensive, I left it, intending to wait for it to drop in price. Content with watching the movie over and over again to get my fill of the soundtrack, I didn't see that album again for another 5 years. The next time I saw it, it was still $35. I bought it anyway. It was worth every cent.

After seeing the movie, I shot down the stairs and straight into the record store for this one, I was that keen to hear the full songs! The hints and teasing snippets throughout the movie left me hungry for more, it was like a burning feeling in my head.

Being one who enjoys the darker music (since my first taste of Sisters of Mercy, I've been hooked. It calls to something in me that lurks in places most people are afraid to explore) the tunes and melodies on this soundtrack were nearly irresistable.

And I was not the only one it seemed, since they record store had sold out and had to order me a copy. Though I would have happily handed over the full price of nearly $35, due to a really rude staff member and a stuff-up in delivery causing a huge delay, by the time it arrived the store manager gave this one to me for free, making it EXCEPTIONAL value for money in my mind. However, since this would not normally be the case, I had to rate it a little lower. I still feel that it would be a great buy though.

The music suited the movie perfectly, and was an integral part of the plotline, giving depth to not only the movie, but to the songs themselves. If you have seen the movie, you will be transported back to it every time you listen to the CD. The songs tell such stories of Vampire Lore that if the world Anne Rice built in her novels were real, you really could imagine the Vampire Nation getting seriously pissed at Le Stat for exposing all the juicy bits in his songs.

Overall I would have to rave about this more, but it is getting late, and I don't want to put you off by ranting TOO much. If you are even slightly of the gothic music bias, you will buy this, light a few candles in strategic places around the room, block out all other light and sway to these tunes.

If you're not into that sort of thing, bugger off, this is not for the likes of you.