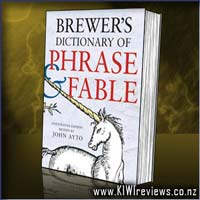 A fully revised and updated edition of one of the world's best-loved reference books, bigger and better than ever, and with a creative and imaginative new editor.

'... there's never a dull moment to be had with this great, daft, pointless, wonderful brick of a book' - Amazon.co.uk First published in 1870, Ebenezer Cobham Brewer's treasury of 'words that have a story to tell' is one of the world's best-loved reference books. At the heart of the dictionary lie entries on the meaning and origin of a vast range of words and expressions, from everyday English phrases to Latin tags. For the 17th edition of Brewer's, new editor John Ayto has revised and updated the existing text and added 1500 new articles. The latter include recent words and phrases (Al-Qaeda, 9/11), characters, places (and monsters) from recent fantasy literature (including The Lord of the Rings and Harry Potter), famous political and sporting nicknames (Butcher of Baghdad, Goldenballs) and - continuing the century-old Brewer's practice of recording unexpected and fascinating information not available in other general reference books - 'list entries' as diverse as misattributed quotations, the language of text messaging, words and phrases in British Asian English and the 'etymologies' of rock group names.

Five Children and It

The Last of The Spirits
Rating: 9.0

Brewer's is one of those books that should always be on your bookshelf, to look up those nagging questions that one will not necessarily find elsewhere. Those nagging phrases, those odd regiment names, characters from books and a veritable goldmine of trivia and knowledge. The book is unique, an institution even, one that has moved with the times aquiring the new and discarding some of the old and unnecessary verbiage within the hallowed tome.

Ayto, the current editor must be a brave man to take the helm of this revered volume and decide what must go, what must stay and what needs to be added or updated. This must be no mean feat for the weak and feint-hearted - and it was a job Ayto managed with aplomb.

When comparing with my old 'Centenary Edition' (1970 / 12th Edition) one can see just how much this tome has grown in that time, by a full half-inch in thickness! Far more knowledge contained therein for any interested reader can ever hope to assimilate, but to those regular Brewer's buyers, it is a must have, must read and must regularly consult. Terry Pratchett sums it up very nicely in his foreword, which is as much a read as the rest of the book.
If one is unfamiliar with the history or Brewer's - then take look at the introduction too, which contains excepts from the Centuary Edition: A memoire from Captain Hayman - Brewer's Grandson.

To sum up: Brewer's is a logophile's feast, a pedant's dream and and essential reading for who like to dissect old and odd phrases. Brewer's fans are never disappointed; you will not be disappointed to receive this volume into your personal library.

The Confederation is starting to collapse politically and economically, allowing the `possessed' to infiltrate more worlds. Quinn Dexter is loose on Earth, destroying the giant arcologies one at a time. As Louise Kavanagh tries to track him down, she manages to acquire some strange and powerful allies whose goal doesn't quite match her own.

The campaign to liberate Mortonridge from the possessed ... more...