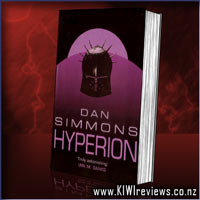 Disclosure StatementFULL DISCLOSURE: A number of units of this product have, at some time, been supplied to KIWIreviews by the company for the purposes of unbiased, independent reviews. No fee was accepted by KIWIreviews or the reviewers themselves - these are genuine, unpaid consumer reviews.
Available:
March 2006

The book that reinvented Space Opera

It is the 29th century and the universe of the Human Hegemony is under threat. Invasion by the warlike Ousters looms, and the mysterious schemes of the secessionist AI TechnoCore bring chaos ever closer.

On the eve of disaster, with the entire galaxy at war, seven pilgrims set forth on a final voyage to the legendary Time Tombs on Hyperion, home to the Shrike, a lethal creature, part god and part killing machine, whose powers transcend the limits of time and space. The pilgrims have resolved to die before discovering anything less than the secrets of the universe itself.

Spirit Animals #5: Against the Tide
Rating: 9.8

The Magicians of Caprona
Rating: 9.8

The first in the Hyperion Cantos, Hyperion introduces us to the far future, where Artificial Intelligences have been born by the hand of man, then decided not to be our slaves, but be our partners. Using manmade star travel, in the form of the Hawking Drive, and the co-location wormhole portals, known as farcasters, the Human Hegemony has spread out amongst over 200 planets across the galaxy. But they are not alone. There are many forces, some acting from times and places you could hardly imagine.

With the whole universe crowding around one place, at one time, things are bound to get a bit wierd, especially for the 7 pilgrims, who just know on some deep level that this is 'the time' and 'the place' and they are important elements of 'something big'... and what an assortment they are! Depending on the technicalities of it all, there could be 9 pilgrims in some regards. Human and non-human, young and old, male and female... and what tales they have to tell, the circumstances that brought them all together for this final showdown.

You see, none of them really expect to get out alive. Whether it's the bandits, the turncoats, the shrike or the weather, or any number of other nasty situations... one way or another they are sure they walking into their deaths. As they journey, they share their backgrounds, their stories, and often the stories of others that were influential. It really explores the depths of each character in the most amazingly natural way. It's like being the ultimate fly on the campfire wall.

As the tension mounts, with all sorts of snags conspiring to stop them, including the incandecent beauty of the interstellar war in orbit above them, the pilgrims slowly vanish, stolen away to spend eternity impaled on the Tree of Pain. But with all things 'time', there are twists... sometimes the effect can come before the cause to our way of thinking. You have to love a good temporal twist, but this... well, this is just something else far beyond astounding.

Of all of the main characters, if I could trade places, I would trade with Brawne Lamia, Private Investigator from the Hives of Lusus, a heavy planet, pulling with 1.3G. Simply put, the things she is shown in her travels through dimensions of pure digital information... I want to see that one day. She gets to have adventures that boggle the mind.

Dan Simmons has set a new pace in sci-fi with this offering. The sheer scope of this tale is incredible, joining such epic universes as Smith's Lensman, Clarke's Rama and even Julian May's Exiles... Simmons has done a brilliant job of adding extra dimensions to the tale, pushing it out of the bounds of imagination and into whole new realms. The technologies that appear are described enough over the course of the story in such a way that it is accessible to all levels of readers, without becoming overwhelming. The 'big concepts' are there, but don't drown out the actual plot. It's a delicate balance well performed.

Overall, if this is just the start, it looks to be a wonderful journey to come in book 2, and I just can't wait to dig in!

Join Thea Stilton and the Thea Sisters on an adventure packed with mystery and friendship!

The Thea Sisters are in Russia for a figure skating championship! When their new friend is falsely accused of theft and barred from competing for the gold medal, the five mice resolve to clear her name. Along the way, they discover ancient love letters that could be the key to finding the real culprit! But can they solve the mystery in time?