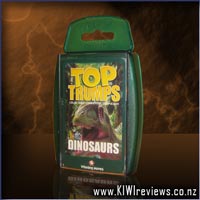 Disclosure StatementFULL DISCLOSURE: A number of units of this product have, at some time, been supplied to KIWIreviews by the company for the purposes of unbiased, independent reviews. No fee was accepted by KIWIreviews or the reviewers themselves - these are genuine, unpaid consumer reviews.
Available:
At Quality Stationary and Games Outlets

What is it about dinosaurs that make them so appealing to generation after generation? Whatever it is we've got it in bucketloads. Full of beautiful, realistic and dramatic illustrations, Gigantosaurus, Velociraptor, Brachiosaurus and Triceratops all feature. Compare facts such as Height, Weight, Length, Killer Rating, Intelligence Rating and Age (million years).

2 or more players can play. Players deal the cards amongst themselves and one player will read out a fact from their top card the other players must openly compare the same fact. Whoever has the highest fact, wins the opponents cards. The winner will be the person who has all the cards at the end. If you don't know your Archaeopteryx from your Euoplocephalus you need this Top Trumps pack now!!

My son (5yrs) is Dinosaur mad so we got him these as a reward for reading well. We love these cards over all the others he has collected, as these have great facts and the game is very fun to play.
In our house the only person that can pronounce the Dinosaur names is my son, so he gets to be the boss when we play, which turns this into a very educational game. My son learns to be a Dinosaur Expert and Teacher, which boosts his self-esteem, aswell as ability to lead a group. We have found it easy to play the game and we all love the artwork.
My son found and old pack of the same Dinosaur cards in his uncle's old toy box, the pictures are exactly the same, this has given my son the urge to collect all dinosaur cards for when he is old. I would use this as a gift for people 0-100 that loves Dinosaurs.
Especially those budding Palaeontologists like my son.

My son is mad about dinosaurs, and spent ages before even attempting to play the game reading the facts about the dinosaurs and marvelling over the pictures so i could see that as well as being entertaining they are educational as well. The game itself was fun, the hardest part being trying to pronounce some of the dinosaur names.

Being somewhat of a Dinosaur fan I was suitably impressed when I saw this offering from the Top Trumps range, it has all your favourites such as the T-Rex, Triceratops and the Velociraptor as well as a whole heap more of their not so well known cousins. The images on these cards are top notch and the information contained on each card makes it very easy for people of all ages to understand. And of course the game itself is very easy and lots of fun to play.

Being one of the 'Classic' series, this is an older-style deck, and that is reflected in the somewhat faked up artwork... but let's look at this in perspective... Last time I checked, dinosaurs were still all dead, and thus rather difficult to get a decent photo of... and since we still don't have wormhole cameras that will allow us to film the ancient past, all we have is best-guesses from the experts.

So, with some highly detailed drawings and paintings, and some rather clever image editting and compositing, these cards actually do have some reasonable artwork, but not up to the shiny minty-fresh artwork of the Specials deck range.

The Classics range are great to throw a deck or two into the car's glovebox or caravan entertainment cupboards for those times of need when away from home. Just as good as any other deck from whatever series takes your fancy, but just something a little more down to earth I guess.

Overall, still a great game, this deck is more for older kids with better language skills. The dino names can be a bit tongue-twisting for the little ones. One thing that came to mind when I grabbed for this deck however was the colour-coding of the cases themselves makes for easy selection from a number of decks. Though I couldn't see any of the titles in the box of decks, I had a fairly good idea of which one's were which... this translucent green really signified "Reptiles" at first glance.

I quite liked this game, even though I could hardly say some of the names. The images were very clear, if a bit flat on some cards. Even though some of the other decks are more interesting, more fun or have extra features, this is still a good 'standard' deck. I would see this deck more as a functional deck, rather than a deck I would make a gift out of. A fun deck for kids at the higher end of the age bracket.

After looking at the special releases of Top Trumps and coming to the dinosaurs I was a little disappointed in the artwork - it hadn't seemed to have changed since the 70's and was strongly reminiscent of my original purchase come 30 years ago. The packing case had changed a lot - the cards hadn't. Then I as reminded that these were Top Trumps Classic Range and probably are reprints of the original game and I was beginning to get nostalgic for a mispent youth playing Top Trumps with my friend in the desk next to me in French lesson. It was difficult to play without the teacher seeing - and when we did get caught, I remember having to learn all the number in French and having to play in French - I guess in hindsight, it was a useful educational tool - though I won't be forcing my daughter to learn Spanish, French or Japanese with this deck - That would be too mean....

Anyway, back to the cards, well, the card case. I have recollections of a pale green case that seemed to crack very easily from all the school boy abuse it recieved both in French lessons and in the playground afterward. We would all vie to play our deck; I, desperately hoping that the other kids would want to play Dinosaur Top Trumps instead of Helicopters or Trucks or whatever the other titles were...but I digress yet again....

The Card are illustrated clearly with nice, clean artwork - not up to today's modern CGI images - but not too shabby either. Do remember this is the Classic Range and probably is from the original production plates and you won't be disappointed if you have just been playing with their new Specials range. The only thing I would suggest that would make the cards more fun to the younger player would be to include a phonetic pronunciation guide underneath the name. I am still, 30 years later, an ardent dinosaur fan - I even have a Plesiosaur vertibrae on top of my TV. I can pronounce the dinosaur names with reletive ease. I am the minority.
That minor grumble aired, I will say it does not detract fromthe game in any way. The game was enjoyed by my daughter (Mad Reader), and I know it will be in her regular play list.

I found the dinosaur names hard to read but I had a lot of fun trying to read them. I think something to make the names easier to say would have been really helpful because they are very long names. They would be interesting words to read.

They had some nice pictures of dinosaurs and I think this will be one of my favourite packs. I think the boys and girls in my class at school would be interested in playing this game because it is really cool.

Set up your fleet, scan the radar, crew to battle stations. When you find an enemy ship, lock target, aim your torpedos and fire. Can you blast them out of the water? You have just 3 chances to hit your target.