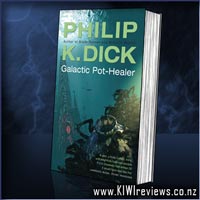 Joe Fernwright is a pot-healer, a repairer of ceramics, in a drably utilitarian future where such skills have little value. But the Glimmung is offering Joe a way out of his isolated, meaningless life.

It wants him to travel to Plowman's Planet to work on a project there with dozens of other odd creatures. And it may not be a bad idea to do what the Glimmung wants. After all, it is prepared to pay well, it could be divine and, like so many other gods, it has a bad temper...

Night of the Hawk

Philip K. Dick has written some amazing stories in his time, amongst some of the more 'famous' have been "Do androids dream of electric sheep?' which became the cult sci-fi movie classic 'Bladerunner', Minority Report and Total Recall to name just a few of the highflyers. However with 'Galactic Pot-Healer' he has taken a trip on the wierder side of the future, where employment is such a rarity, yet about as functionally important as watching paint dry, where highly evolved beings battle in god-like ways, yet are as petulant as spoilt children, and where one man can make all the difference, even though he sees himself as an utter failure.

This book was a bit of a tough one to keep track of at times, since the planet most of the storyline is set on has 'issues' with the flow of time... it's different above the waterline than it is below... under the ocean, time skips around seemingly at random, allowing a diver to go under and return 10 minutes later as normal, but while down there meet their future, usually-dead self. This makes for some strange twists in an otherwise convoluted plot, however all is cleaned up pretty well by the end of the tale, which has a melancholy conclusion.

In a story where fear and apathy dominates the plot, there are smatterings of love, anger, concern and even bloody battle between near-godlike aliens, however the overall feel of the story is well balanced and doesn't lead the reader to end the book prematurely. I was hooked right to the end.

'Twas the dawn before Christmas and, down at the bach,
Santa was fishing ... just one more he'd catch.

From the creators of the ultimate Kiwi Christmas read-aloud A Kiwi Night Before Christmas comes this prequel - and Santa's got work to do! Luckily his trusty little helpers have been busying themselves in his workshop with all that gift wrapping.
But those prezzies won't be going anywhere without ... more...