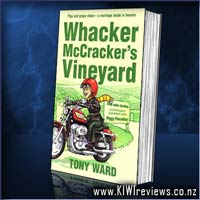 Disclosure StatementFULL DISCLOSURE: A number of units of this product have, at some time, been supplied to KIWIreviews by the company for the purposes of unbiased, independent reviews. No fee was accepted by KIWIreviews or the reviewers themselves - these are genuine, unpaid consumer reviews.
Available:
23rd Jan 2006

In Whacker McCracker's Cafe we first met the utterly original ex-Auckland businessman who escaped his five predatory ex-wives by moving to Waiheke Island to open a simple little cafe and start a new life. Whacker's hilarious first year on the island created colourful mayhem - but that was nothing compared to what happens when his eccentric aunt moves to Waiheke from Gore and buys a new vineyard. For her piggery...

Then things really warm up. There's the enormous statue of Jesus with pigs that appears on the Waiheke skyline for a start, battles with bureaucracy, a rampant elephant marauding on the beach at midnight and an evil plan to turn the vineyard into a sewerage plant - as Whacker, Wally, Mal and Big Bets drive Sergeant Jack start raving bonkers...With his wildly creative imagination firing on all cylinders, Whacker finds and exploits some unique market gaps, poking lighthearted fun at the more pretentious end of the wine market. With loads of belly laughs and slapstick non pc fun, Whacker McCracker's Vineyard is ideal summer reading.

The Human Body - A Journey of Discovery
Rating: 9.5

Maui and the Goddess of Fire
Rating: 8.0

Tony Ward is reminiscent of Tom Sharpe in his farcical comedies, bordering on satire of island life, authority, politics and people.

In this, Ward's second novel, we are re-aquainted with Wacker McCracker and his band of 'gentlemen' who know just how to manipulate people for their own gain and just for the fun of thumbing thier noses at authority. Not wanting to detract from the story or give any more of the plot away, this book is a roller-coaster of belly laughs from start to finish.

Clearly written narrative leads you from one page to the next and a yearning to see what happens next; in no time, you are finished and wanting more. I will have to get the first book to read the start of Wacker McCracker's adventures, and I can say with absolute certainty that I will be eagerly awaiting all future releases from Tony Ward's pen. This man is to be watched for more offerings of the warped mind of a master author.

On New Year's Eve, Callum Ormond is chased down the street by a crazed man with a deadly warning: They killed your father. They'll kill you. You must survive the next 365 days! Now he's on the run.

The people who killed his father want him dead, and the police are chasing him for a crime he didn't commit. A month has gone by and he's still no nearer to solving the Ormond Riddle, the family secret that has turned his life into a ... more...