« The Veil of a Thousand Tears review 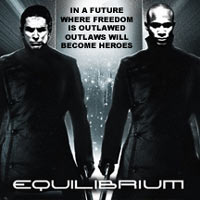 In the early years of the 21st Century the Third World War ravanged the planet. Those who survived knew that humanity could not survive a fourth. A new arm of the law was created, the Grammaton Clerics, whose job it was to seek out and destroy the true cause of Man's inhumanity to Man... Feelings.

In this world, every citizen is required to take a daily dose of Prozine, the opiate of the masses, a pharmaceutical designed to stabilise our hormones and chemical flows, ensuring conformity and eliminating the highs, and low, of human emotion.

Even in this dystopian paradise, there is unrest. The Underground is composed of those individuals who have 'gone off the dose' are have become guilty of 'Sense Offence' - the crime of emoting, of feeling, of being fully human again.

These are the targets of the Grammaton Clerics. These are the people who need a hero. Thier hero is there, waiting... he just isn't aware of it yet.

The population of the planet, those who survived the nuclear war, are so numb on Prozine that even the violent arrest and summary incineration alive of a loved one of family member hardly warrants a raise eyebrow or reaction.

The world as it stands is ruled over by the Tetragrammaton, the ruling body headed up by Father, who's edicts are passed down the chain of command by The Council. The Council in turn utilise The Grammaton Clerics as their enforcers. These guys are cold, stone cold killers. They are trained in the high art of the Gun Kata, a martial art unlike any other we know today.

The fight scenes are powerful, fast, smooth, and had me sitting on the edge of my seat saying "Dangnabbit! I wanna be able to shoot like that!" - or complaining that they were over so fast. But guns are not all... hand to hand combat and (bliss) swords (bliss) are also in their skillbase.

But the most compelling part of this movie was the "mirror on today's society" aspect, where all citizens are required to conform, are under constant surveilance from cameras and family, friends and starngers all, and are basically required to be the cogs in the machine, the big machine, driven by Father and his minions. This aspect of it brings back memories, those 'old farts' like me, of such classic warnings of anti-libertarianism as "1984" by George Orwell and "THX-1138" by Steven Spielberg. There are even hints of "Millenium" with it's 'Shades of Grey' cubist buildings and conformist traffic flows, etc. A single man running is as spectacle worthy of note, and an admission of Sense Offence in this world.

Overall, I wouldn't pay to see it again, because quite frankly this sort of thing scares the bejabbers out of me, in a way not much else can. However, because it rang familiar bells, I was hooked on watching it, and I could almost believe that such a world is possible, especially the constant surveilance aspect. (I mean really, do we know who sees all the images we PXT off from our fones, cameras, etc?) The special effects were well done, especially the fight scenes.

My only gripe was that all the fight scenes were awesome, with the highly notable exception of the final sword fight, which lasted barely 10 seconds! It had a longer lead-up than it did an actuality!

Way cool, worth seeing, especially if you enjoy a good mind-freak now and then, to wake you up and make you think outside the whole geometry, let alone square!

A honeymooning bride (Rose Leslie) goes sleepwalking into the woods surrounding a secluded cabin. When she returns she looks the same, but something about her is frighteningly different.