Tilly and the Bookwanderers review

ProdID: 8556 - The Republic of Birds
Written by Jessica Miller 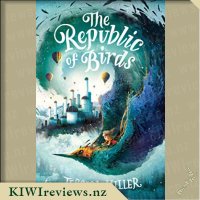 The Republic of Birds product reviews

Olga loves the stories of the old cartographers and pores over their ancient books and maps, trying to unlock their secrets. Sometimes, she can even feel through the mapsâ"almost see into them â" as if by magic.

When the bird army kidnaps Olgaâ ™s sister, Mira, Olga knows that only she can venture into the Republic of Birds to rescue her. But first, she must unlock her magical ability.

As her journey takes her into the hidden world of the Iagas and the wilds of the Unmappable Blank, Olga discovers the truth about the war with the birdsâ"and learns just how much is at stake in her quest to save her sister.

Inspired by Russian folklore, The Republic of Birds is a rich and spellbinding fantasy adventure.

The Wheels on the Bus - a Sound and Action book
Rating: 9.3

My mother is a prolific writer of reviews on Goodreads and as such has caught the attention of the odd author or two. She was contacted and offered a copy of The Republic of Birds, which after she had read, handed it to me saying it was a must read. I will admit that there were some words that I struggled with, more because I wasn't sure quite what the Russian pronunciation would be, but beyond that, this was an easy book to read that flowed really well and kept my attention throughout. The book takes ideas from Russian folklore, such as the Yagas (women who have magical abilities) and the Russian opulence of old.

Olga is a young girl who isn't given much attention from her father, has a famous, over-acting stepmother and a younger sister who outshines her. When they get banished, Olga finally gets the adventure she always yearned for. Olga is a strong character in that nothing she does is beyond her abilities and she doesn't suddenly become a pro at anything she's doing. When she discovers her magical ability, it is something that she has to work on and be careful with or risk losing forever. The characters she meets along the way don't get huge back stories but they're written well enough that it fits well and throughout the book we get little snippets to show what led up to the war between the humans and birds.

So many books involving magic have everything working out and ending well, that isn't the case with this book but it works really well and Olga is content because she did what was right. I look forward to more books from Jessica Miller.

When Nat Carver and his Wolven pal Woody learn that their arch enemy is creating a bad werewolf pack, they know they must stop him.

Although it doesn't help that Nat's having problems with his own shape-shifting ability.

Digging deep into history, the boys have to solve clues and riddles to stop one of the worst monsters ever!