« The Twilight Zone: Season One review 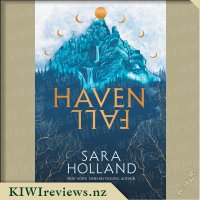 For Maddie Morrow, summers at the inn are more than a chance to experience this magic first-hand. Havenfall is an escape from reality, where her mother sits on death row accused of murdering Maddie's brother. It's where Maddie fell in love with handsome Fiorden soldier Brekken. And it's where one day she hopes to inherit the role of Innkeeper from her beloved uncle.

But this summer, the impossible happens--a dead body is found, shattering everything the inn stands for. With Brekken missing, her uncle gravely injured, and a dangerous creature on the loose, Maddie suddenly finds herself responsible for the safety of everyone in Havenfall. She'll do anything to uncover the truth, even if it means working together with an alluring new staffer Taya, who seems to know more than she's letting on. As dark secrets are revealed about the inn itself, one thing becomes clear to Maddie--no one can be trusted, and no one is safe . . .

Warrior of the Altaii
Rating: 9.8

Havenfall isn't a new premise... multi universes converging in one area, magical nations at odds with each other, throw in some betrayals and secrets coming out... yeah, no new premises, but whilst this was a rather slow feeling read for at least the first half of the book, it ended up being an interesting read which, whilst focusing on the magic and such that comes with it, focused hugely on Maddie, someone who had wanted the position she now finds herself in for her whole life but now incredibly out of her depth. The author does a lot of world building, which is understandably needed for where she takes the reader but I did find that it felt like a lot packed into such a small space and so the book felt like a very long read, even though I finished it within a day, fitted around serving customers.

One thing that I liked about the book is the simple, matter of fact addition of LGBT characters, they're written exactly the same as any other straight character would be, our main character is bi-sexual, the mysterious new staffer, Taya, is gay, as is Maddie's uncle (who is also married). So much of this book is "things are not as they seem/who can you really trust" that when you get to the last five chapters, so much is thrown at Maddie that you wonder how she can possibly maintain any sanity at all by the end of it. The book ends really well, it is obvious that it has been left open for a sequel but I feel like it doesn't need one, yes there is plenty to go on for another book but I don't need to know, I feels right to leave it as a stand alone book.

This book won't have me rushing out to read any more by this author but I did enjoy Maddie's world at the end of the day.

Sssh... NOT for parents! You can keep a SECRET, right?

Clara and I have a herd of tiny, talking, oopsie-whoopsie, flying horses - and they're REAL!

It's true. Those naughty Miniwings get us into so much TROUBLE, especially that RAZZLY-DAZZLY Unicorn, Moonlight!

This book is the sixth in this delightful series, each of which stars one of the personality-packed, mischievous Miniwings in his or her own ... more...