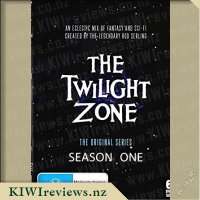 "There is a fifth dimension, beyond that which is known to man. It is a dimension as vast as space and as timeless as infinity. It is the middle ground between light and shadow, between science and superstition, and it lies between the pit of man's fears and the summit of his knowledge. This is the dimension of imagination. It is an area which we call The Twilight Zone."

Settle in for 36 episodes where nothing is as it seems, the strange is normal and where anything can happen.

Doctor Who: Season One
Rating: 9.4

The title dialogue and music is one of those things that I grew up and whilst I don't recall much of the episodes I knew that they were good for their time. Recently, I visited the rubbish tip shop and they had had a huge amount of DVD's brought in, several of which were old sci-fi (my Doctor Who collection got a nice boost), among them was season one of The Twilight Zone and soon enough my mother and I were watching two to three episodes a night, and I can tell you this, they have stood the test of time, with some twists that even we still didn't quite see coming.

"The tools of conquest do not necessarily come with bombs and explosions and fallout. There are weapons that are simply thoughts, attitudes, prejudices...to be found only in the minds of men." This comes from one excellent episode, 'The Monsters are due on Maple Street' and the quote is one that is easily seen in today's world. If you know your Henry Wadsworth Longfellow, then there is one episode that you will certainly work out the twist immediately but it never felt cheesy, so it was still easy to get caught up and enjoy it. 'Time Enough at Last' is one of my favourite episodes from this season, I knew what was coming as it was the only one I could recall, but it still had me enjoying it all these years later.

There are 36 episodes to spend your time on, they are well worth the watch, not only because of the range of actors who perform in these episodes but they're another look back at sci-fi, at some of the tales which shaped the genres future. Take a step into the Twilight Zone, you won't be disappointed.

Hair it is, everyone... Furry Tales fur your listening pleasure! Anthony, Emma, Lachy and Simon are eggcited with 21 wiggly songs about their animal friends.

The Corroboree Frog will have you croaking with fun while the Bunny Hop is a hare-raising" experience! Jump and sing along with The Monkey Dance and then there's Say the Dance, Do the Dance which is the catchiest song youll ever hear!

Sing along and dance along with Furry Tales, the best DVD since Noah built the ark!