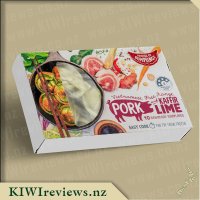 Wake up your taste buds!!! Let's travel to the streets of Saigon and experience these exotic flavours and herbs.

At House of Dumplings, we're dedicated to producing high-quality, healthy and delicious dumplings. We use only the freshest, most ethically produced ingredients that we source locally wherever possible. 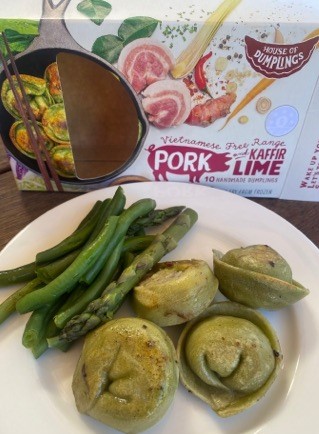 Five of us sampled these dumplings, and five of us liked them - a good start! To my surprise, the two youngest (aged seven and ten) were very positive about them. These two can be fussy eaters so it was nice to find that they enjoyed them. Everyone picked up on the lime aroma which became stronger as the dumplings began to heat through. The first taste was just as rewarding; the lime permeated the skin of the dumpling so that every part of it was filled with flavour. Two of our number thought the amount of lime could actually be reduced as it tended to take over to the exclusion of other herbs and spices, but the other three (including me) liked the strength of the flavour as it made the dumplings unique, unlike any others we had tasted before.

Mr Ten was pleased that there was plenty of meat in his share. As a dedicated carnivore, he enjoys all kinds of meat so having a good-sized filling was important for him. We have eaten purchased dumplings in the past which consisted of skins and very little inside, which he found unpalatable; he considered that he was cheated! I thought he might find the lime and other spices a bit too hot as he does not normally go for spicy food, but this combination was just right. He identified the cabbage in his share straight away, having first tasted and then broken a dumpling in half so he could look inside it. He likes cabbage too so that was fine by him.

Miss Seven ate one, but decided against a second. She was one of the two who had found there was a little too much lime for her taste. Her second was not wasted - we had allocated two each (as there are ten in the packet) so Mr Ten happily ate the spare on the pretext that he did not want to waste it. It is good when children will try new foods, however, and she certainly did eat her first.

The adults all liked the dumplings - the person who, like Miss Seven, thought there was a bit too much lime said she did like them; she just would have preferred to taste the rest of the ingredients too. We felt that a packet would be enough for two people as the individual dumplings are quite filling, and they would be nice either served as an entree on their own or as part of a main meal with salad or stir-fried vegetables. I am going to buy another packet to try with other family members over the holidays so will be interested to see if they like them as much as we did.

6 chicken tenderloins covered in a crisp and crunchy crumb, cooked to perfection and served with a dip of your choice. Sinfully delicious.