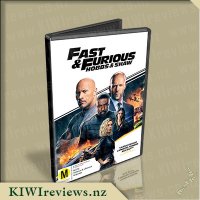 Dwayne Johnson and Jason Statham return to their unforgettable roles as Hobbs and Shaw in this action-packed feature from the blockbuster Fast and Furious franchise. For years, hulking lawman Luke Hobbs (Johnson) and lawless outcast Deckard Shaw (Statham) have traded smack talk and body blows. But when cyber-genetically enhanced anarchist Brixton (Idris Elba) gains control of an insidious bio-threat that could alter humanity forever, Hobbs and Shaw must partner up to bring down the only guy who might be badder than themselves!

If you are hoping to see a movie with plenty of action and amazing special effects, look no further. This is a film which had me on the edge of my seat at times, periodically reminding myself that it was only a movie and I was watching actors who were going to walk away from the set at the end of the day unscathed! Some of the special effects were outstanding; they included a couple I had never seen in any other film, and because I am curious about such things, I had to find out after watching just how many were CGI, and how many involved real actors performing stunts in real time. It is a credit to the technical crew that it was difficult to tell most of the time.

Although this is basically a twist on a conventional buddy movie with apologies to the James Bond franchise and all the spy-adventure-gadgetry-techno films that have followed in that genre, it is also cleverly crafted in its own right. The two heroes, Luke Hobbs (Dwayne Johnson) and Deckard Shaw (Jason Statham), are men of few words but those lines that they do get to deliver are often laced with humour, and there are references to world events and occasional lines from other movies which increase audience engagement. It is also of interest to see the Pasifika involvement in both actor Dwayne Johnson - along with some of the supporting cast - and the setting, although I do wonder why the Samoan scenes were actually shot in Hawai'i!

Idris Elba gives a fun performance as cybernetically-enhanced villain Brixton. He is a polished performer who invariably delivers: if I see him listed in a film's credits, I anticipate that I am bound to enjoy the performance. Add to that Helen Mirren in a hilarious portrayal of the jailbird Magdalene (aka Queenie) and I am hooked. Although she has a small part, she delivers it to perfection: her style of humour is understated rather than highly physical as with the main protagonists, but no less delightful. Rounding off the main cast is Vanessa Kirby as Hattie, Shaw's sister; she is nothing like Queenie. Her style has more in common with that of the male protagonists, proving no doubt that girls can do anything.

I enjoyed some of the other innovative effects in the movie. At the very start, when the relationship between Hobbs and Shaw is being set up, a split screen technique is used to show their various differences. Clothing, ethnicity, attitude, accent, background - each is presented in tandem so that the viewer gets a feel for their individual attributes. At the same time, it has already been made clear that these two men - who detest each other - are required to work together to retrieve a vital object that in the wrong hands could spell global disaster. As the character exposition continues, their similarities become more and more apparent, even to their mutual disgust at each other's involvement!

Another interesting element is the insertion of several pivotal scenes into the end credits - including a clue as to the content of a possible movie sequel. Anyone who habitually stands up and leaves the cinema at the start of the credits would miss this section altogether, which would be a real shame! Because I am always interested in watching the credits right to the end (since I want to look at technical details - film locations, soundtrack, props construction, etc) - I often spot an extra sequence, but this movie includes a great deal more than most.

So - anyone looking for a strong plot, serious themes, long speeches, and realistic action might do well to avoid this movie. But for those who are happy to sit through over two hours of improbable situations and impossible stunts (don't try this at home, kids!), and who accept that actions can speak louder than words, this film is tailor-made. The most important message is that of family; Queenie and her loyal children, Deckard and Hattie, will hopefully be reunited once more, while Luke Hobbs and his daughter Sam (Eliana Su'a) return home to his mother Sefina (Lori Pelenise Tuisano) and the rest of his extended family in Samoa. For how long is not made clear!

Van Helsing (Hugh Jackman) is a monster killer who works for a secret society that sends him to Transylvania, a mysterious region overrun with dangerous creatures like werewolves and vampires, to fight tyrannical ruler Count Dracula (Richard Roxburgh).

Once there, he meets Anna Valerious (Kate Beckinsale), a ... more...